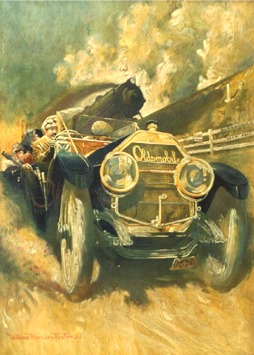 In Halbman v. Lemke, Lemke sold an Oldsmobile to young Halbman, who being under the age of 18, was entiteld to avoid his contractual obligations.  The sale price was $1250, part of which was payable in installments.  However, apparently only weeks after the exchange was made, a connecting rod in the vehicle's enging broke.  Although Lemke, who was the manager at a gas station, offered to install a used engine in the car if Halbman could find one.  Instead, Halbman took the car to a repair shop, which charged him $637.40 for the repairs.

Although Halbman ceased payments on the car at that point, Lemke transferred title.  Halbman returned the title, sought to avoid the contract and demanded the return of the $1100 already paid on it.

Halbman did not pay for the repairs, so the repair shop exercised its garageman's lien and canibalized the car for parts.  It towed what remained of the car to Halbman's father's residence, where it sat, degraded and became unsalvageable.  So matters stood when Halbman sued for the return of his $1100.

Those of you who read last week's Limerick can probably guess how this came out:

Halbman, the young contract signer
Admitted that he was a minor.
When the car blew a rod
Lemke, poor sod,
Was left with some scrap and a shiner

Listed below are links to weblogs that reference Contracts Limerick of the Week: Halbman v. Lemke: