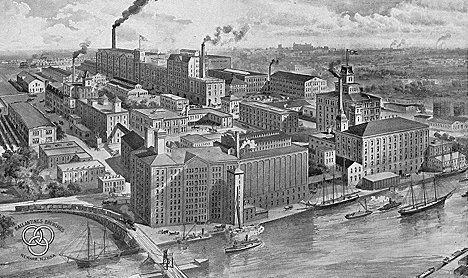 At right is a drawing of the Ballantine brewery in Newark as it appeared in the late 19th century.  Founded in 1840, the brewery grew to be one of the largest in the United States by the end of the 19th century.  Recognizing that nobody without a gut full of beer could enjoy the American passtime, Ballantine cleverly partnered with the New York Yankees.  Through its partnership of that storied team, Ballantine grew to become the third most popular beer  in the United States.

Sadly, in the 1960s the brand declined.  As Judge Friendly recounts in his opinion for the Second Circuit in Bloor v. Falstaff Brewing Corp., in 1969, the brewery suffered the indignity of acquisition by a real estate conglomerate with no experience in brewing.  After bleeding money for a few years, the conglomerate sold Ballantine to Falstaff Brewing Corporation in return for some cash and a promise to use "its best efforts to promote and maintain a high volume of sales" of Ballantine beer.  If it ceased to sell the beer entirely, the contract provided for liquidated damages.

Falstaff chose not to promote Ballantine beer.  It's marketing strategy was summarized by Falsataff's controlling shareholder as follows: We sell beer, F.D.B. the brewery.  You come and get it.  That didn't work very well for Ballantine, and its volume of sales plummeted.  The trustee of what remained of Ballantine sued alleging breach of the best efforst clause and seeking liquidated damages.  Judge Friendly's conclusion is summarized below:

Falstaff had to adhere
To its deal to sell Ballantine beer.
Volume’s not killer
When there’s Bud, Coors and Miller.
Still, its efforts must be sincere.

Listed below are links to weblogs that reference Contracts Limerick of the Week: Bloor v. Falstaff Brewing: