As reported here by mlb.com, ESPN and Major League Baseball (MLB) have entered into an eight-year, $5.6 billion agreement, which includes TV and radio rights to MLB programming both in the U.S. and internationally, keeps baseball on the network through 2021 and includes a record-setting increase in annual rights fees (doubled to $700 million from $360 million annually). 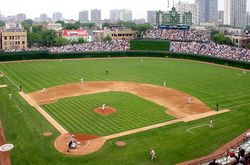 Wrigley Field
The agreement significantly expands the network's studio and game content, allowing ESPN to broadcast up to 90 regular-season MLB games plus wild card games for both leagues and the ever-exciting All Star week events (not including sunflower seed spitting).  Further, ESPN was granted the right to air the annual opening night game, games played on national holidays, and it may air up to ten Spring Training games per year.  Games can also be streamed through ESPN.com and an ESPN app.

And there was much rejoicing.

ESPN's president said, “Baseball remains the national pastime," but the truth is, baseball has long been eclipsed by other sports and then by video games based on other sports and then by video games about killing people, and then by video games about killing zombies.  Meanwhile, there was recently talk of MLB becoming a wholly-owned subsidiary of Justin Bieber, Inc.  Commissioner Bud Selig commented that "today is a very historic day for baseball."   Taken in the context of a sport that is so hung up on statistics that every day is considered "historic" (Wow, Lou, that's the first time that a rookie switch-hitter has struck out looking from both sides of the plate in the same inning -- what a historic day!), Selig's comments seems to be downplaying the deal.

According to the New York Times, ESPN's rival networks, Fox, TBS, NBC and CBS, are still contenders in the baseball airing arena, as ESPN did not manage to grab the division series or league championship series games.  There's still some history out there to be made.

Listed below are links to weblogs that reference Money Well Spent on “America’s Favorite Pastime”:

Apropos of nothing, your remarks regarding our national pastime is phenomenal. Who can I attribute that quote to??