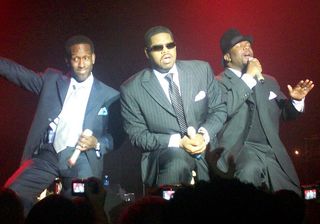 Last night, the Green Bay Packers redeemed themselves against the Chicago Bears after a disappointing Week 1 loss to the San Francisco 49ers. However, the Packers' quarterback, Aaron Rodgers, still has not redeemed himself after allegedly backing out on a bet with Nathan Morris of the R&B group, Boyz II Men.  The terms of their original deal reportedly were as follows: (i) Boyz II Men agreed to perform the national anthem before the Packers' week 1 game with the 49ers at Lambeau Field; and (ii) in exchange, Aaron Rodgers agreed to wear a 49ers jersey but only if the Packers lost to the 49ers.  (Even though Boyz II Men were part of the "East Coast Family" of the 1990s, they're apparently fans of a West Coast NFL team, the San Francisco 49ers. But I digress.)  Sounds like a pretty straightforward promise to perform in exchange for a promise to perform subject to a condition precedent, right?  Well, Boyz II Men performed, and the 49ers won, but... Aaron Rodgers has not worn the 49ers jersey.  Cue the Twittersphere and TMZ.  Rodgers, like Zehmer, claims that his jersey-wearing promise was a joke.  In this interview clip, Rodgers says, "It was a [unintelligible] joke between friends" that's been "blown out of proportion."  Morris claims it was a serious deal, tweeting after the game that he "was pressing the jersey now."  However, Boyz II Men also suggested they will give Aaron Rodgers more time to perform.  If not, anyone want to represent them against Rodgers?  Or is this the End of the Road for this matter?

Listed below are links to weblogs that reference Is Boyz II Men v. Aaron Rodgers the New Lucy v. Zehmer?:

OK, that is quite hilarious. I'd almost love to see a lawsuit just so we could have a case about this to teach. :-)

It is so fun to see fellow children of the 80's serving as law profs! I am always having to pre-screen my cultural references, as it is all too easy to forget that some of my students were not alive for even a second of the 80's, and the ones who were may have been mere preschoolers. (I think I have only very recently finally accepted that most all of "my" music is the stuff of mere nostalgia now. Sigh.)

We could also have some real fun with this--and suss out the real 80's aficionados among this bunch--by including a little quiz, like "Without clicking on the hyperlink, name the other two members of that East Cost Family. " :-)