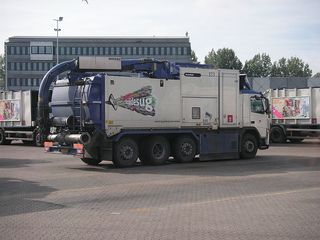 We apologize to the honest, hardworking people in the legitimate business of waste management and understand that the business is not "mobbed up" as the following Limerick suggests.  Poetic license.

The Kunz & Chomsky casebook contains a bounty of new cases that provide interesting perspectivs on contracts doctrine.   Angel v. Murray is a vehicle for exploring the doctine of prior consideration/contract modification.

The City of Newport entered into a five-year contract with Maher for refuse collection, with a contract price of $137,000/year.  Three years in, Maher requested an additional $10,000/year on the ground that the city had added 400 new dwelling units, which was unexpected, since the city had been growing at a rate of 20-25 new units per year.  Under R.2d § 89, the case seems a no brainer.  The modification is "fair and equitable in view of circumstances not anticipated by the parties at the time the contract was made."

The case would be more interesting if Mr. Maher were actually named Mr. Soprano and we had suspicions about the real reasons for the increase in the payments.  We can imagine that such a Mr. Maher might defend himself as follows:

As Maher explained at Da Bing!
Waste management’s really our t’ing
It costs some cannoli
To dump your e coli;
‘Dis isn’t about buyin’ bling.

I thought I was done writing Limericks, but then I switched to the Kunz & Chomsky casebook and got inspired.   In short,

Listed below are links to weblogs that reference Contracts Limerick of the Week: Angel v. Murray: