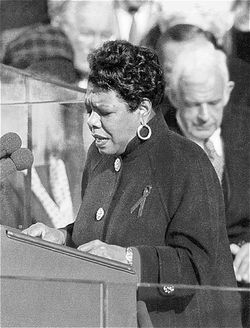 In addition to teaching Lucy v. Zehmer for the first time this semester, I was also introduced to a new case, B. Lewis Productions, Inc. v. Angelou, thanks to the Kunz & Chomsky casebook.  The case is a modern re-telling of Wood v. Lucy, Lady Duff-Gordon.

In 1994, Butch Lewis, a boxing promoter and manager, entered into a letter agreeement with the autobiographer and poet, Maya Angelou (left) to promote her writings through their pubication on greeting cards, stationery, calendars, etc.  According to the case, Mr. Lewis came very close to closing the deal with Hallmark, but Ms. Angelou backed out, perhaps because she was disturbed when she saw him "punctuate a conversation with white people by grabbing his crotch."  Why the court thought it was important or thought that Angelous thought it important that Lewis's audience is white is a subject reserved for our speculation.

The crotch grab took place in Las Vegas, which makes it seem quite tame, but in any case Angelou was angry.  She shared some choice words with Lewis and told him that their joint venture was at an end, but subsequent letters indicated that her interest remained.  Angelou famously likened herself to Balzac and other 19th-century writers who said "I write for money."  Perhaps she did not want to burn her bridges entirely with Lewis, if he could get her a sweet deal with Hallmark.

In 2000, Angelou negotiated her own deal with Hallmark, leaving Lewis out.  Since their original letter agreement stressed that Lewis would be her exclusive agent, and that status was confirmed in a 1996 letter from Angelou, Lewis, playing the role of Wood, sued for breach of contract.

After a lengthy discussion of Wood v. Lucy, the Southern Distrct of New York denied summary judgment to both sides, leaving open the question of whether Angelou had successfully terminated her agreement with Lewis before entering into negotiations with Hallmark.  According to the Kunz & Chomsky casebook, the parties then settled for $1 million.


The case got me thinking about why more poets don't write greeting cards.  I am married to a poet, so I know that very few can write for money, as Balzac put it, although many would be happy to do so if they could.

Imagine how touched your mother would be to receive a Mother's Day Card with a excerpt from Philip Larkin's "This Be the Verse":

Man hands down misery to man.
It deepens like a coastal shelf.
Get out as early as you can,
And don't have any kids yourself.

That would really make Mom's day!

Of course, the first verse of that poem would make an even better card, but this is a family-friendly blog.

Listed below are links to weblogs that reference Teaching B. Lewis Productions v. Angelou:

That's all well and good Jeremy but where is the limerick?