United States Found in Breach of Contracts with Indian Tribes; Ordered to Pay in Full

Pursuant to the Indian Self-Determination and Education Assistance Act (ISDA), the Secretary of the Interior enters into contracts with Indian tribes.  The tribes the provide services that would otherwise be provided by the Federal Government.  ISDA requires that the Secretary (pictured) pay "contract support costs" incurred by tribes in connection with the contracts, subject to the availability of appropriations.  However, between 1994 and 2001, Congress appropriated funds sufficient to cover only between 77% and 92% of the aggregate contract support costs.  It instead paid portions of the contracts on a pro rata basis.  The tribes sued for breach of contract prusuant to the Contract Disputes Act. 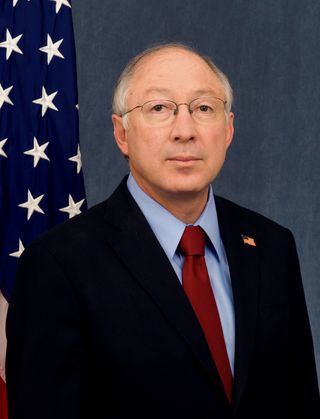 The issue decided June 18th by the U.S. Supreme Court in Salazar v. Ramah Navajo Chapter was whether the U.S. government must pay those contracts in full when Congress fails to appropriate sufficient funds.  The District Court had granted summary judgment to the Government, but the 10th Circuit Court of Appeals reversed, because Congress had made sufficient funds "legally available."  Judge Sotomayor, writing for the 5-3 majority, uphled the 10th Circuit.

Just seven years ago, in Cherokee Nation of Oklahoma v. Leivitt, 543 U.S. 631, the Court faced a similar situation and ruled that the Government was not excused from its contractual obligations where Congress has appropriated sufficient funds to pay the tribes but the Indian Health Service, but the agency had decided to allocate the money elsewhere.  Here, Congress appropriated sufficient money to Bureau of Indian Affairs (BIA) but that agency had not allocated sufficient funds to pay the contracts at issue here.  The Majority also relied on Ferris v. United States, which provides that the Government is responsible to a contractor for the full amount due under a contract even if the agency exhausts is appropriation in the service of other permissible ends.

Chief Justice Roberts, joined by Justices Ginsburg, Breyer and Alito, dissented, noting that the Government's obligation to pay was made expressly contingent on the availability of appropriations and that payments under the contracts were not to exceed a set amount, which will be exceeded as a result of the Majority's ruling, nor can the Secretary be required to reduce funding for aother programs in order to make funds available under the contracts.  For the dissenting Justices, ISDA creates a triply whammy that the Majority ignores.  It provides that the Government's obligations are (1) subject to the availability of appropriations; (2) not to exceed a set amount; and (3) limited because the Secretary is relieved from any oblgiation to make funds available to one contractor by reducing payments to others.

The Majority responds by noting that this confuses appropriations by Congress, which were adequate to cover all the conracts at issue, and the allocation of those funds by the BIA.

Listed below are links to weblogs that reference United States Found in Breach of Contracts with Indian Tribes; Ordered to Pay in Full: