CBS Squashes Production of Original Series Star Trek Episode: "He Walked Among Us"

As reported in The New York Times, the discovery of a lost episode of Star Trek has sparked a, so far, non-litigious debate over CBS’s decision to enforce its right in the material and to prohibit the online airing of an amateur production based on the episode’s script.

Norman Spinrad wrote the episode, He Walked Among Us,” in 1967 after the show’s producers approached him with a four-day deadline and a box of no-doze.  The producers thought the episode might provide an opportunity for comedian Milton Berle to work a dramatic role.  Tragically, the episode never aired, and Spinrad’s script ended up getting donated to the archives at Cal State Fullerton, where it sat unnoticed for decades. 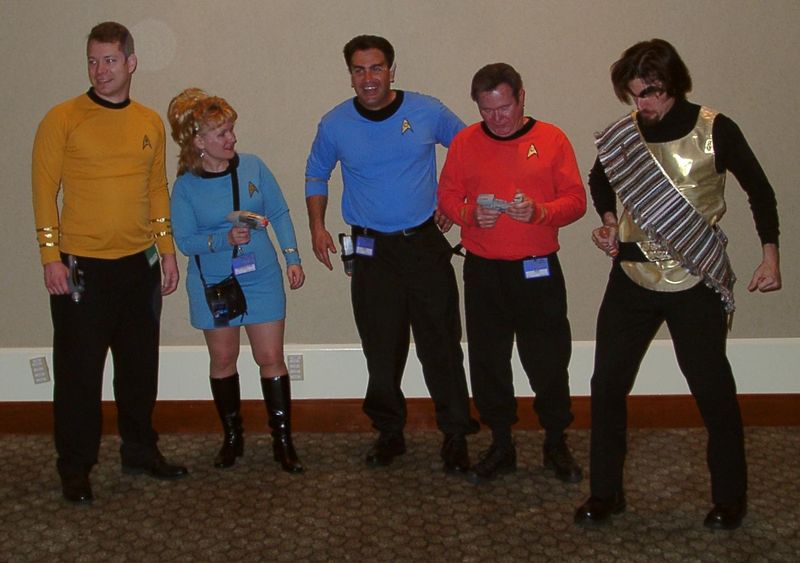 Years later, Spinrad was approached at a convention by a Trekkie (depicted in the image above) who asked Spinrad to sign a copy of “He Walked Among Us.”  Spinrad later teamed up with James Cawley to discuss the possibility of finally producing “He Walked Among Us.”  Cawley is senior executive producer for “Phase II,”  a web-based production studio that uses unpaid amateur actors to act out Trekkies’ favorite episodes.  In these productions, Cawley plays Captain Kirk, which is a bit like putting together a Shakespeare company so that you can play Hamlet.  But still . . . .

CBS sent Cawley an email, asking him to cease production of the episode.  CBS has been consistently buying merchandising, television and online rights to Star Trek.  Cawley and Spinrad apparently have good relations with CBS and want to keep things that way.  As Spinrad puts it on his website,

I and CBS have agreed to resolve our disputes concerning the ownership of the Work; as part of the settlement between the Parties, the Parties have agree that there will be no further comment; and CBS is considering opportunities to offer licensed copies of the Work.

Because of the above, I can no longer comment on the He Walked Among Us screenplay myself.

It is uncertain exactly why CBS has allowed Phase II to produce other unaired Trek projects but has decided to stonewall this project.   Here are the leading theories:

Listed below are links to weblogs that reference CBS Squashes Production of Original Series Star Trek Episode: "He Walked Among Us" :

I want all star trek fans to see this. As an avid star trek fan I almost cried with laughter after I saw it. It is a blog that shows photos Of people in northeast philadelphia that have the exact same haircut as Spock. check it out you wont be disappointed http://spocksighting.blogspot.com/

Had Cawley already started production of the episode prior to CBS's cease and desist request?