In 1978, the Commonwealth of Pennsylvania enacted the Pennsylvania Steel Products Procurement Act (the Steel Act), which requires that, with certain enumerated exceptions, steel products used or supplied in the performance of a public works contracts must be made in the U.S. 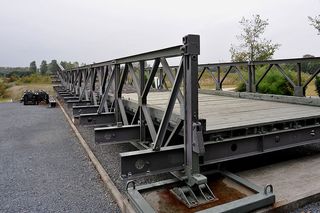 Mabey Bridge & Shore, Inc. (Mabey) has been involved in public work projects, including projects for the Pennsylvania Department of Transportation (PennDOT), for over twenty years.  In 2009, Mabey subcontracted to provide a bridge for PennDOT.  However, in April 2010, PennDOT informed the contractor that because the bridge was considered a “public work,” the Steel Act prohibited use of Mabey’s temporary bridge on the project owing to the fact that Mabey used foreign steel.  As a result, Mabey was forced to cancel four contracts for temporary bridges on PennDOT projects, and has been barred from giving future quotes.

Mabey filed suit in the United States District Court for the Middle District of Pennsylvania against Pennsylvania’s Secretary of Transportation, seeking a declaratory and injunctive relief.  The District Court granted the Secretary’s motion for summary judgment on all of Mabey’s claims.  On its appeal before the Third Circuit Mabey argued that: the Steel Act is preempted by the Buy America Act, 23 U.S.C. § 313 and violates the Commerce Clause; and that PennDOT’s actions violated the Contract Clause and the Equal Protection Clause. In an opinion filed on January 24th in Mabey Bridge & Shore, Inc. v. Schoch, the Third Circuit affirmed the District Court’s grant of summary judgment.

Much of the Third Circuit’s opinion is taken up with issues other than the Contracts Clause.  The Third Circuit found that the Buy America Act did not preclude stats from enacting mor restrictive requirements related to the use of domestic steel and thus did not preempt Pennsylvania’s Steel Act.  Mabey’s Dormant Commerce Clause claim was more or less precluded by a prior Third Circuit decision, Trojan Techs., Inc. v. Pennsylvania.  In any case, the Court found that, as Congress had plainly authorized restrictions of the kind contained in the Steel Act, the Act created no problems under the Commerce Clause.  The Court also relied on Trojan Techs. in affirming summary judgment on Mabey’s Equal Protection claim.  The Court held applied rational basis scrutiny in upholding the constitutionality of the Steel Act.

The Court noted that Mabey bore the burden to prove that PennDOT’s had violated the Contract Clause by  establishing that a “change in state law has ‘operated as a substantial impairment of a contractual relationship.’”  The Third Circuit found that Mabey failed to do so, as the Steel Act was enacted in 1978 and was in effect at the time Mabey entered into its contracts.  Although Mabey conceded that the passage of the Act itself could not be the “change in law” that impaired its existing contracts, it argued that PennDOT’s change in interpretation met this requirement.

However, the Supreme Court established in Ross v. Oregon that the Contract Clause applies only to the exercise of legislative power.   Based on Ross, the Third Circuit found that there is no violation of the Contract Clause when the act in question “investigates, declares, and enforces liabilities as they stand on present or past facts under laws supposed already to exist.”  Although Mabey was justified in believing that its bridges were acceptable due to its long relationship with PennDOT, PennDOT’s actions are best characterized as interpretive, not as an exercise of legislative authority.

Moreover, in Fleming v. Fleming, the Supreme Court rejected the argument that the Contract Clause is violated when there is a new interpretation of an antecedent statute.  Thus, because PennDOT’s actions interpreted and applied a law that had been in force for over 30 years, it did not exercise legislative authority subject to scrutiny under the Contract Clause, and the Third Circuit affirmed the District Court’s grant of summary judgment to PennDOT.

Listed below are links to weblogs that reference Third Circuit Upholds Pennsylvania's Steel Act in the Face of a Contracts Clause Challenge:

Great post. The fact that the court relied on how long the law had been in effect (30 years) raises some interesting questions. There are many old laws on the books that remain there simply because there is no issue with enforcement. It isn't until the the government or a governmental agency like PennDOT starts enforcing an old law that it will get attention in the legislature and it seems a matter of semantics that the contract clause should only apply to acts by the legislature, when the triggering event for the issue is the conduct of and decisions made by PennDOT. In this case, however, there may not have been enough (or any) evidence that PennDOT was engaging in selective or random enforcement of an old law, which allowed the court to focus on the age of the law, implying that, if you don't like the law, write your legislator, don't litigate with PennDOT.