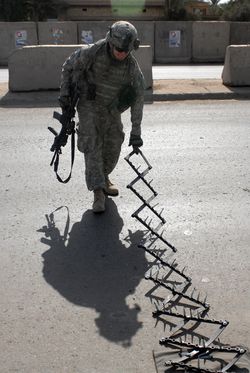 As we’ve previously noted here, Jesse Dimmick fled murder charges against him in Colorado and made his way to Kansas.  As reported in The Topeka Capital-Journal, Kansas police officers were in pursuit of Dimmick and punctured his tires of the stolen van he was driving using something called "stop sticks" (pictured -- according to Wikipedia the device is also known as traffic spikes, tire shredders, one-way traffic treadles, and stingers and is formally known as a tire deflation device).  His van came to a stop in front of the home of a newly married couple, Jared and Lindsay Rowley.

According to Dimmick, he entered the newlyweds’ home and offered them an unspecified amount of money if they would permit him to hide from the police.  Dimmick claimed that the Rowleys agreed and that the parties had thus created a legally binding oral contract.  However, after Dimmick fell asleep, the Rowleys left their home and contacted the police.  When entering the home, the police claim that an officer’s gun accidentally discharged, striking Dimmick in the back.

Originally, the Rowleys filed suit in the Shawnee County District Court against Dimmick seeking damages in the amount of $75,000 for trespass, intrusion and negligent infliction of emotional distress.  Dimmick countersued for $160,000, which was the amount of his hospital bills and an additional $75,000 for pain and suffering, alleging that as a result of the Dimmick’s breach of contract he had suffered a gunshot to his back, which almost killed him.

Attorney Bob Keeshan, for the Rowleys, filed a motion to dismiss Dimmick’s suit. Keeshan argued that such a contact would not be legally binding because it was made while the Rowleys were under duress, being held at knifepoint. Last month, Judge Franklin Theis sustained the motion to dismiss.

Dimmick has also filed charges against the city of Topeka and the police officer whose gun discharged.  Trial for this case is set for early April.  In Colorado, Dimmick awaits his trial for the September 2009 murder of Michael Curtis.

Dimmick may have lost this round, but in another sense, he has already won.  His law suit was the runaway winner in the 2011 poll for the most outrageous law suit on the web site, Faces of Lawsuit Abuse.org.

Listed below are links to weblogs that reference Crime Doesn't Pay (Contracts Damages):