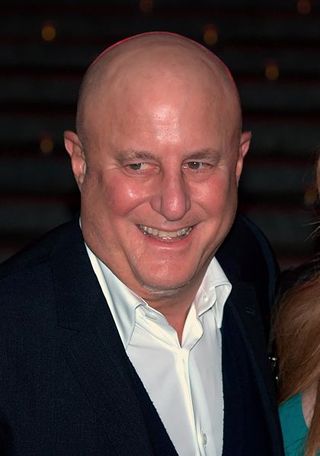 The number $16 million seems to be in the air.  Last week, Meredith Miller reported on a $16 million typo.  Over the weekend, we learned of a decision in Donald Drapkin's suit against billionaire corporate raider Ron Perelman (pictured).  Perelman likely has not been ordered to pay so much money to an individual since his divorce from Faith Golding.  Except for when he divorced Claudia Cohen.  Unless he paid that much when he divorced Patricia Duff.  Well, and let's not forget Ellen Barkin.

Fans of the course alternatively known as Corporations, Business Organizations or Business Associations are familiar with Ron Perelman, as are Mergers and Acquisitions afficianados.  A notorious greenmailer, Perelman  did battle with Revlon's Michel Bergerac and prevailed in a case we have previously discussed here.

As reported in The New York Times here, it took a federal jury a bit over an hour to determine that Mr. Drapkin had abided by the terms of his 2007 separation agreement from Mr. Perelman's holding company, MacAndrews and Forbes.  While Wall Street insiders wonder why a man worth $12 billion would quibble over a paltry $16 million sum owed to a long-time associate, Mr. Perelman's attorneys have announced plans to file a motion asking the judge to set aside the jury verdict. An appeal will likely follow.

At issue was whether or not Mr. Drapkin had fully complied with his contractual obligation to destroy all files relating to the company.  Some such files were found on the laptop computer of his personal assistant. The parties disputed both whether Mr. Drapkin was allowed to retain some copies and whether or not the alleged breach was material.  According to the Times,

The case was largely fought in the weeds of contract law, with lawyers arguing over the interpretation of particular words and phrases. At issue was whether Mr. Drapkin, who now runs a hedge fund in New York, had “substantially performed” under the contract.

Hold on there a minute?  Is the New York Times calling the doctrine of substantial performance a weed?  Hello?  New York Times?!?  Have you ever heard of the New York Court of Appeals and a little-known Judge named Benjamin Cardozo?  He authored an opinion in a humble case called Jacob and Youngs v. Kent that is among the most beautiful pieces of writing in the history of American jurisprudence.  In it, Cardozo articulates the doctrine that you now denigrate as a "weed"  as follows:

This is merely to say that the law will be slow to impute the purpose, in the silence of the parties, where the significance of the default is grievously out of proportion to the oppression of the forfeiture. The willful transgressor must accept the penalty of his transgression. For him there is no occasion to mitigate the rigor of implied conditions. The transgressor whose default is unintentional and trivial may hope for mercy if he will offer atonement for his wrong.

From lesser weeds jurists have harvested a bounty that feeds the multitudes.

Listed below are links to weblogs that reference Speaking of $16 Million, Ron Perelman Must Pay Former Partner: