The Contracts Behind the CSA: Just Food on Supporting Farms and Shared Risk 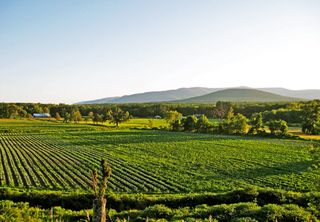 Hurricane Irene was not as destructive as predicted for New York City.  It did, however, unleash extensive devastation in upstate New York and many farms were severely flooded.  In line with an FDA ruling, the New York State Department of Agriculture & Markets has issued a blanket recommendation prohibiting the sale of any crops exposed to flood waters, declaring that food unfit for human consumption.

As a result, the farm that supplies my CSA share (pictured before the flood) was put out of business for the season.  I am out my money, but I have tremendous sympathy for the farmers.  I am reminded that the CSA is made possible by contracts, which allocate risks from farmer to consumer.

A recent CSA newsletter from Just Food was forwarded to me, and it reflects poingnantly on shared risk:

In New York City Hurricane Irene was much less severe than projected, however, the same cannot be said for many areas in upstate New York, New Jersey, Vermont, and throughout the Northeast. While not all of our CSA farmers were severely affected, others sustained tremendous damage. All week we have been soberly witnessing images of farms under feet of water, hearing stories of farmers who are still unsure of the severity of the damage to their fields, helping farmers think through their next steps and beginning to have what I'm sure will be the first of many conversations with NYC CSA members.

Community Supported Agriculture is a partnership- a mutually beneficial long term relationship between farmers and their members. Shared risk is a concept that is included in every description of CSA and in every membership agreement form. In most years, sharing risk means that a few of the crops that a farmer originally plants and plans to include in shares don't make it in. Occasionally it means a late start to the season due to a wet spring. In 2009, sharing the risk meant few or no tomatoes as most New York farmers were hit with tomato blight. But mostly we don't notice our risk as our shares are supplemented with the bounty of the other 100 varieties of vegetables that CSA farmers have planted.

But the concept of shared risk is very real, and in the wake of Irene we are all reminded of this. No matter how skilled a farmer is, no matter how hard she works, no matter how well he's planned, there was nothing they could have done to prevent the severe flooding. Farmers continue to wait for flood waters to recede so that they can determine the full extent of the damage.

In addition, area farmers received notice from the FDA yesterday that crops covered in flood waters should not be sold for human or animal consumption. While affected farmers are struggling to ensure that they have safe food to provide to their members, yesterday's FDA ruling will likely make it even harder for farms to recover.

Unfortunately, this all comes at the worst time of the season. Money has already been invested in crops that now cannot be harvested, and it is now too late in the season to replant many crops. When bad weather strikes in the spring, farmers have time to replant and recover. This late in the season there simply aren't enough days to start over for many crops, particularly for slower growing winter crops: for instance, winter squash takes 100 days from seed to harvest, potatoes take from 70 to 120 days, turnips 60 days, onions 80 to 150 days. Unfortunately, at this point in the season, there just isn't that much time left.

In addition, CSA farms often don't have crop insurance. Crop insurance is tied to a particular crop, rather than the farm as a whole, and as a result, is better geared for farms that grow large amounts of fewer crop varieties. For this reason, it's very difficult for CSA farmers--who grow 100-150 different crop varieties--to value their crops in order to apply for crop insurance. For CSA farms who do have crop insurance, the insurance doesn't come close to covering their losses, the claims process is incredibly complicated, and reimbursement can take months.

These losses are devastating, but CSA farmers are not just throwing up their hands and walking away. At the same time they greatly appreciate the support that CSA provides, they also feel a tremendous sense of responsibility to their members. As we speak, farmers and their crews are diving in and working hard to assess the damage, begin clean up, and make repairs to fences and barns to make the farm ready and viable for next season. They're also looking at their fields-those that aren't still under water-to figure out how, or even if it's possible, to make the best of the remaining season for their members.

Many CSA core groups and members have reached out to Just Food to find out what they can do to help their farmers. As CSA members, you have already provided stability and support for your farms. Hurricane Irene is an all-too-real example of the kind of weather disaster that can put small family farms out of business. CSA is a vital partnership that can allow farms instead to survive, to return next season and provide the usual bounty to its members.

What your CSA farmers need the most now are your patience and understanding, as well as your commitment to their farm over the long haul.

This reflection is about farms and risks, but it is fundamentally about the contracts that make the CSA possible.

Listed below are links to weblogs that reference The Contracts Behind the CSA: Just Food on Supporting Farms and Shared Risk: