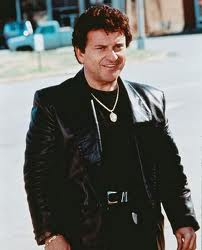 For anyone in need of a current case/hypo to help illustrate promissory estoppel (and perhaps the statute of frauds along with unjust enrichment), consider the latest suit filed by famous actor, Joe Pesci.  In his breach of oral contract complaint,* Pesci claims that he was promised the role of round-faced Angelo Ruggiero in a new film about famed gangster, John Gotti, to be played by John Travolta.  In reliance on that promised role, Pesci abandoned his usual diet and exercise routine and gained thirty pounds to look more like Ruggiero.  After the weight gain, producers advised Pesci that he no longer would be playing Ruggiero in exchange for the initially-promised $3 million; instead, he would be offered a lesser role (playing the man who allegedly killed Gotti) for $1 million.  Pesci alleges that the film producers were enriched because they used his established mobster-playing cache to help promote the movie and obtain funding.  The film's current producer claims that Pesci was the one who backed out of the deal after Pesci's preferred director, Nick Cassavetes, quit.  Pesci acknowledges that there was no written contract but a signed writing likely would not be required in this case.   If Pesci can't show an otherwise valid oral contract, promissory estoppel issues to ponder include...Was there an actual promise?  (Pesci points to a press conference and a website announcement as possible sources of the promise.)  Was Pesci's reliance reasonable?  Is there injustice absent enforcement of the promise?  And what exactly are his damages?

Listed below are links to weblogs that reference Purposefully Plumper Pesci Professes Promissory Estoppel in Pursuit of Producer:

He needs to have all overweight women on his jury. Putting on that much weight to begin with would make me feel awful. Men lose weight easier and quicker than women in my opinion. Any woman I know would be overwhelmed at the thought of losing thirty pounds. Even if you're able to, it means a lot of hard work and sacrifice.

Was he reasonable in believing he had the role? That is going to be an issue. But if the answer is yes, I don't think most women would have a problem finding he suffered damages.