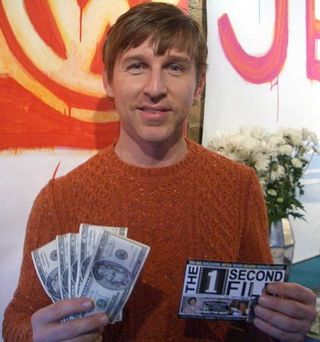 The Second Circuit describes Todd Oldham (pictured) as a "world famous artist, fashion and graphic designer, photographer, writer and television personality."  Since 1989, he has operated through L-7 Designs, which manages his design services and intellectual property rights.

In 2007, L-7 approached Old Navy and proposed a strategic partnership.  Old Navy eventually requested that Oldham become its Design Creative Director.  The deal called for L-7 to design a Todd Oldham branded line of clothing in return for 5% of sales.  Oldham would be paid an annual "fee" of $2 million for three years plus bonuses.  The deal was announced and was supposed to begin in October 2008, but Old Navy dragged its corporate feet.  On September 30, 2008, Old Navy informed L-7 that it wanted to postpone the signing of a license for the Oldham branded line indefinitely.

One week later, L-7 notified Old Navy that it was in material breach of the original agreement for failure to negotiate in good faith.  Old Navy responded that it was not contractually obligated to do anything and regretted that it was simply unable to enter into the license agreement due to economic conditions.  L-7 responded with a letter demanding lost royalties and reputational damages ($75 million) plus Mr. Oldham's fees for the second and third years the agreement ($4 million).  Old Navy denied that it had breached the duty to negotiate in good faith, pointing out that the parties had genuine differences that made it impossible to move forward as initially planned.    Negotiations to work out an alternative deal failed in early 2009.  L-7 sued and Old Navy then terminated its deal with L-7, claiming that L-7 had materially breached the agreement by filing a lawsuit and not participating meaningfully in negotiations.

In January 2010, the district court dismissed L-7's complaint, specially finding implausible, based on the documentation of negotiations attached to Old Navy's answer, L-7's claim that Old Navy failed to negotiate in good faith.  In the district court's view, L-7 made "extraordinarily high demands" and could not show failure to negotiation in good faith simply be arguing that Old Navy had insisted on terms to the point of impasse.  The district court also dismissed L-7's claim for wrongful termination on the ground that, although Old Navy did not provide 30-days notice as required, such notice would have been futile as L-7 had already sued.

The Second Circuit reversed both of these dismissals, while upholding the district court's dismissal of L-7's remaining claims.  The Second Circuit concluded that L-7 did state a claim alleging that Old Navy breached its duty to negotiate a license agreement in good faith because it failed to participate in negotiations between April and December 2008 and then ultimately proposed terms that it knew would be rejected.  The Second Circuit found these allegations plausible for the purposes of a motion to dismiss.

The Second Circuit rejected the district court's dismissal of L-7's claim for wrongful termination because L-7 alleged that it had been terminated without notice and Old Navy has conceded as much.  In so ruling, the Second Circuit made the obvious point that bringing suit seeking a declaration of the meaning of an agreement is not a breach of that agreement.  The district court's conclusion that cure was impossible was speculative.