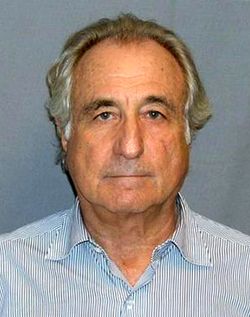 The New York Times published a story today about Steven Simkin, a New York attoney who is trying to re-negotiate his divorce settlement because, although he and his wife Laura Blank split their assets evenly after a 2006 divorce, much of his portion of the divorce settlement was invested with Bernie Madoff (pictured).  Simkin wants Blank to pay back some of the millions he lost as a result of Madoff's fraud.  His claim sounds in the doctrine of mutual mistake.

When the parties divorced they split up $13.2 million in assets, $5.4 million of which was in a Madoff account.  Mr. Simkin now claims that there was no account, only a Ponzi scheme.  Ms. Blank counters that there was an account with an uncertain future value and thus the parties were not mistaken as to the crucial fact at issue in the case.

Six judges have already weighed in on the case, and the Times suggests that a result that favors Mr. Simkin could require the revisiting of other divorce settlements as well as other types of contracts affected by a mutual mistake.  According to the Times, there already has been one copycat case in the divorce settlement context.

The most recent opinion in the case, from New York's Appellate Division, 1st Department, can be found here.  Last month, that same court granted leave to appeal to New York's highest court, the Court of Appeal, after it ruled 3-2 in favor of Mr. Simkin on Ms. Blank's motion to dismiss on the pleadings.

Here is the heart of the reasoning underlying that conclusion:

The dissent then states, "Steven liquidated part of the account to fund his payments to Laura." Untrue. In Madoff's Ponzi scheme what appeared to Steven and Laura to be a partial liquidation of an account was simply a payment to Steven that came from funds deposited by a more recent "investor" in what the "investor" believed was his own account.

The dissent further observes, "[Steven] did not liquidate the rest of the Madoff account . . . and he continued to invest in it." Untrue. There was no account which could be liquidated, as became apparent when Madoff received $7 billion worth of "liquidation" calls from investors in 2008. Nor was Steven "investing" in an account; his further contributions went directly to pay other "investors" in the scheme.

Listed below are links to weblogs that reference Contracts Law Fallout from the Madoff Affair: