One year after argument, the Supreme Court of Texas issued its opinion on April 15, 2011 in Italian Cowboy Parnters, Ltd. v. The Prudential Insurance Company of America.  The Court's 6-3 majority concluded that a contract's merger clause does not prevent a party from bringnig a claim based on fraudulent inducement.  The Court reversed teh judgment of the court of appeals and remanded.  It also rendered judgment in favor of Italian Cowboy on its claim for rescission prmised on a breach of the implied warranty of suitability. 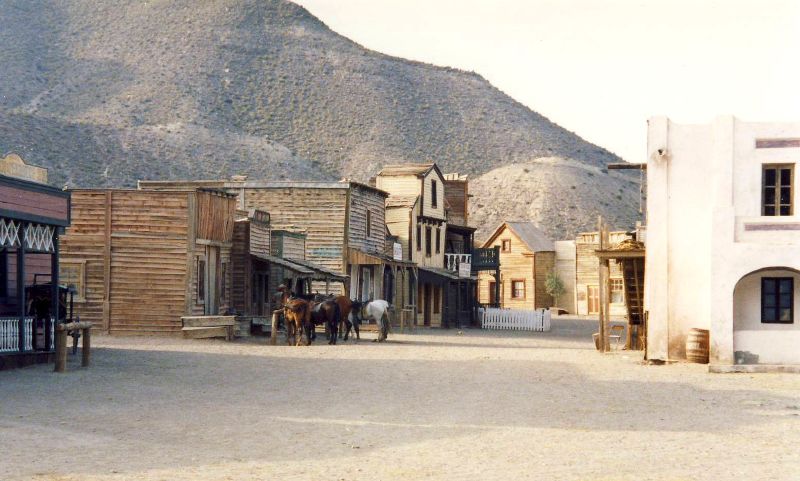 lacking an image of an actual Italian Cowboy, we make do with this image of a set from a Spaghetti Western

The case arose when Jane and Francesco Secchi (the Secchis) sought to rescind the lease on their "Italian Cowboy" restaurant because of a persistent sewer gas odor.  The landlord, Prudential, counterclaimed for breach of contract.  During the negotiations of the lease, representatives fro the property management company repeatedly told the Secchis that there was absolutely nothing wrong with the property.  The lease agreement included standard clauses stating that the landlord and its agents had made no representations about the property other than those contained in the agreement and that the lease constitutes the entire agreement between the parties.

While the Secchis were renovating the property for their restaurant, they learned that the previous tenant had been a hamburger restaurant that was plagued by a "very, very bad odor."  The representatives for the property manager denied any knowledge of an odor problem but eventually conceded that a sewage smell did now plauge the Italian Cowboy.  The Secchis eventually learned from the previous tenants that the property manager's representatives were in fact well aware of the odor problems, which were the cause of the demise of the previous tenants' restaurant.  The trial court thus found for Italian Cowboy on all of its claims, awarding over $600,000 on the lease, plus attorneys' fees, prejudgment interest and $50,000 in exemplary damages because "lyin's bad, mmkay?"  The court of appeals reversed.  It did not permit rescission and it found in favor of Prudential on its counterclaim for breach of cotnract.

The Supreme Court first held that the lease contract did not effectively preclude the Secchis from relying on Produential's representations and that the language in the lease could not negate Italian Cowboy's fraudulent inducement claim.  The Court cited case law going back 50 years to the effect that a merger clause does not stand in the way of a fraudulent inducement claim.  Because the court of appeals did not address all of the factual elements of that claim, the Court remanded Italian Cowboy's fraud claim back to the court of appeals.

The Court also found that nothing in the contract relieved Prudential from liability for breach of the implied warranty of suitability and that the sewage odor was a latent defect vital to Italian Cowboy's use of the premises.  Accordingly, the Court rendered judgment in favor of Italian Cowboy on its claim asserting a breach of the implied warranty of suitability.  The Court thus reinstated teh trial court's ruling on rescission and remanded to the court of appeals for additional consideration of the amount of damages owed to Italian Cowboy.

Three Justices dissented.  While the majority treated the contractual provisions at issue as a standard merger clause, superceding any prior agreements, the dissenting Justices focused on what they viewed as a simple factual statement that the defendants had not made any representations about the property on which the Secchis had relied other than those contained in the written agreement.  They were sophisticated parties and they signed an agreement that contained this factual statement.  The dissenters would not permit them to now come into the court and make a different -- and self-interested -- factual claim that there had indeed been representations made and that they had relied on these representations to their detriment.  The dissenters would also have ruled against Italian Cowboy on the implied warranty of suitability since, in the dissenters' view, the odor problem was covered under the lease which assigned to Italian Cowboy resopnsibility "for all repairs to the interior and non-structural components of the Premises, including . . . all . . . ventilating . . . systems."

Listed below are links to weblogs that reference Supreme Court of Texas Decides Merger Clause Issue:

» "Is Fraud in the Inducement Waived by a Standard Merger or Integration Clause?" from Insurance Claims and Bad Faith Law Blog
Texas Says "No." A Commercial Lease of real property in Dallas, Texas led to a 6-to-3 vote for a negative answer to this question by the Texas Supreme Court in Italian Cowboy Ptrs., Ltd. v. Prudential Insurance Co. of Am.,... [Read More]