EU and US Both Claim Victory in WTO Dispute 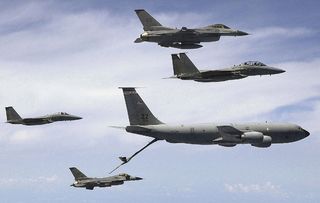 We have been providing on-going coverage, most recently here, of the epic battle between Boeing and Airbus over a long-term contract to provide the U.S. military with refueling tankers, shown at left.  Our last post reported on Boeing's victory in the battle to win the government contract.  Airbus decided not to fight that decision through domestic channels, but the battle continues in the World Trade Organization.

Last week, a WTO panel published its "final ruling" on Airbus's complaint alleging that the U.S. had provided subsidies to Boeing that are prohibited under international trade agreements.  The European Union brought the case on Airbus's behalf, and the panel found that the U.S. had provided at least $5.3 billion in illegal subsidies to Boeing.  As Agence France Presse reports, the WTO found that the EU had provided similar illegal subsidies in a decision handed down last June.  Both sides are appealing that decision.  While the EU characterizes the most recent decision in the case as a victory, AFP notes that it "launched" its appeal of the decision last Friday.

Although the U.S. was found to have engaged in some illegal practices, the result is still being described as a "victory," since U.S. violations were found to be less serious than those found against the EU, according to the Seattle Times.  The appeals process will likely take several more years, and given the WTO's weak enforcement powers, the Seattle Times predicts a settlement in the future that will involve some tweaks to domestic laws that will still allow governments to provide their business partners with the sort of "launch loans" that are in dispute in this litigation.

Listed below are links to weblogs that reference EU and US Both Claim Victory in WTO Dispute: