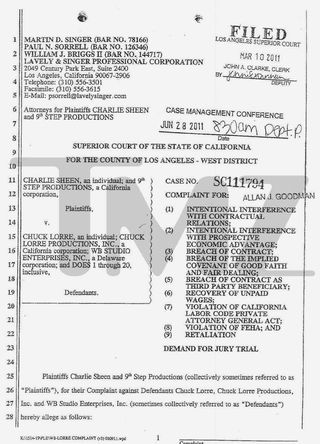 Well, he did say he would sue - back when Charlie wanted to revive the show from hiatus. But then Warner Bros went and changed the game when, as the entire world probably knows by now, Warner Bros fired Charlie Sheen.  Charlie, not being the type to take such things lying down, has returned fire with a lawsuit against Warner Bros and Charles Lorre, the producer of Two and a Half Men.

Charlie - fire-breathing, fire-fisted Charlie - is cast by his lawsuit as the victim - and a defender of the weak.  In short, the lawsuit alleges that Warner Bros. and executive producer Charles Lorre maliciously conspired to wind down Two and a Half Men (2½ M) before Charlie Sheen went on the rampage.  Sheen's suit portrays Warner Bros. as an immoral, conspiratorial, hypocritical, profit hungry betrayer, and Lorre as a fabulously wealthy, egotistical, vindictive bully.

The lawsuit contends that Sheen's antics were not a problem previously - on the contrary, at a time when the star was at risk of being convicted for a felony punishable with imprisonment, Warner Bros is alleged to have been eager to sign Sheen for another two seasons.

So what changed?  According to the lawsuit - in two words - Charles Lorre.  Sheen alleges a pattern of harassment, humiliation, and aggravation  against him by Lorre over a period of years (Lorre's 'vanity cards' are referred to in the suit as an example of this).  The suit alleges that Warner Bros. is utterly loyal to Lorre because of the close, lucrative working relationship between Lorre and Warner Bros - Lorre is said to have an office on the Warner Bros lot, and to have three new series, (for which his cut is allegedly higher than what he gets for 2½ M) under development. Stung by Sheen's radio and TV blitz that was supposedly provoked by the said harassment, Lorre allegedly decided to no longer work with Sheen and from the point onward refused to provide new scripts in breach of his contractual obligations.  The suit alleges this is why Sheen was turned away from the set of 2½ M although he had undergone private rehab (that allegedly involved the services of an expert recommended by Lorre) and was ready, willing, and able to get to work.  Sheen further alleges that the line that he was fired for being incapable to fulfil his duties is a trumped up story.  Sheen strongly contends that he is fit and well, sober (as indicated by recently publicized drug test results), and that he is and always has been ready, willing and able to work.  Warner Brothers, in other words, is accused of scheming with Lorre to maliciously suspend the show, and then wrongfully terminate Sheen's contract for no just cause.

Warner Bros is portrayed as fraudulent, immoral and hypocritical for allegedly pretending to fire Sheen for reasons of moral turpitude when, the suit alleges, it eagerly courted Sheen for the renewal of his contract after he had been charged with a felony and was facing jail time.  Warner Bros is alleged to have reassured Sheen that their contractual relationship would not be jeopardized so long as Sheen's conviction and sentence did not interfere with his recording schedule.  Warner Bros is also portrayed as mercenary and merciless for firing Sheen instead of accommodating him, when he was alleged to be suffering from certain physical and mental illnesses (which ailments Sheen denies in any event).  The portrayal of Sheen as the victim continues through mention of Lorre's "vanity cards" as a deliberate attempt to harass, humiliate and damage Sheen, through to mention of the incident in which Sheen was turned away from the Warner lot.

The lawsuit recites a litany of woes including breach of express terms, anticipatory breach, breach of good faith and fair dealing, breach of duty to a third party beneficiary, intentional interference with rights, interference with prospective economic advantage, frustration of common purposes, disappointment of reasonable expectations and loss of intangible opportunities (continuation as the lead in a star series, and the opportunity to attract endorsements).  Employment discrimination makes an appearance, as well as claims for unpaid wages on behalf of himself and the cast and crew of 2½ M.  The suit seeks compensatory, punitive and exemplary damages, as well as attorneys fees.

Warner Bros' termination letter, and Sheen's lawsuit present two alternative universes in which an innocent plaintiff is utterly wronged by a deliberate defendant.  Given the impression created by Sheen's seemingly erratic behavior in recent times, Warner Bros is seen by some as having a strong case - if indeed it did terminate Sheen for incapacity and his blistering radio and TV rampage.   Warner Bros seeks to portray those events as the last straw that led to a justifiable termination, following evidence of an uncured incapacity or serious medical condition, (a terminable event in Sheen's contract if lasting for ten or more consecutive days, or more than fifteen days in the aggregate over any single production year).  Newspaper accounts seem to suggest that Sheen may have exceeded this allowance, but I wouldn't put my money on Warner Bros just yet.

Regardless of what has been decided in the court of public opinion, incapacity or a serious health (read mental) illness on the part of Sheen has not been proved yet.   If Charlie did exceed the number of incapacitated or sick days permitted, there still may be room for a waiver argument.  If Warner Bros truly sought Sheen out for renew his contract after he was charged with a felony, and further, reassured him that a conviction and jail time would not jeopardize their working relationship, Warner Bros may have waived the moral clause (subject to public policy concerns).   Those actions if proved would also undermine the justifiability of terminating his contract on grounds of moral turpitude (was he allowed to stay in character off set?).  Then there is the question of whether Sheen was terminated because Lorre felt it would be immoral to be a part of Sheen's alleged meltdown, rather than because of Lorre's allegedly egotistical, malicious wishes.  Lorre allegedly has a history of personality clashes with stars he has worked with.

Of course, the whole issue of arbitration still has to be decided.  Warner Bros insists that the contract requires the matter to be arbitrated. Team Sheen has made it clear ,by filing the lawsuit, that it does not share that opinion.  Prepare for a rumble in the Tinseltown jungle.  In the meantime, Charlie still has the (literary) Midas touch.....