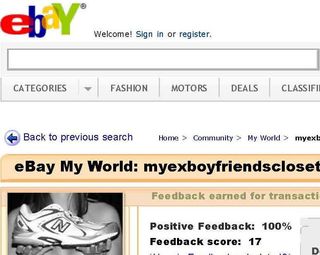 Reading about yet another disciplinary use of eBay, a mad girlfriend who ebayed her cheating boyfriend’s things provides food for thought about contractual expectations in relationships.

A relationship, in pseudo contractual terms, is the interaction of two persons who, because of mutually agreeable expectations, have chosen to spend time together and are willing to perform in certain ways.  "I am willing to commit to this relationship", a prospective girlfriend might say, "because I want to have a companion for social events – a liberator from the dating jungle - and I’m attracted to you and want to get to know you better".  Marriage, the ultimate relational commitment, is thus described as a marriage contract, while actions for breach of promise to marry - aka heart balm actions - are not unheard of.  (Who on earth, you may wonder,  even thinks of suing for breach of promise to marry these days?  Evidently the few that live in a jurisdiction where the cause of action still exists, and are both extraordinarily peeved and brave enough to pursue a claim.)

Once upon a time, the idea of an eBaying paramour would have been unthinkable.  Monogamous marital relationships were the default sixty years ago.  Faithfulness was expected ‘till death do us part’, children out of wedlock were a disgrace, and adultery was a heinous wrong.  To put it mildly, times have changed.  Marriage is not the objective of a relationship for many nowadays .  In fact, some statistics would have us believe that marriage is depressingly out of reach for some.   So what might two people be committing to – or to rephrase for the commitment phobic - what might their expectations be when people decide to ‘become an item’?  Monogamy as in a faithful, exclusive, romantic relationship with only one person at a time?  An enjoyable companionship in which compatibility rather than passion is key?  Expectations of trust and respect driving good faith efforts to abstain from all others, or an ‘open relationship’?  Symbiotic cohabitation, or merely a friendship ‘with benefits'?  The last two do not infer expectations of fidelity or exclusivity, so what was the girlfriend expecting?  This incident clearly illustrates the hellish wrath of a woman scorned.  Since the catalyst for her titillating revenge was discovering her boyfriend had been seen with other women, it is safe to infer that she expected fidelity from the guy.

So, she is furious. We don’t know if he expressly or implicitly promised to be faithful, but she clearly expected that he would be.  Likely she would assert, if asked, that he induced her to believe that he would be faithful – that is, if she was not explicitly promised faithfulness (i.e. as an express term of their relational agreement) by the guy.  However they arose, her expectations of faithfulness were disappointed.  Should her ex be allowed to get away with his relational crime – or should he be estopped from denying his obligation to be true (if any) and be accordingly punished?  Presumably she doesn’t want the guy back.  Her actions indicate that she wants to make him pay for the betrayal and she wants it to hurt.  How she goes about this is the crux of the story. The boyfriend preferred her to dress conservatively during their relationship so what does she do?  She posts scantily clad pictures of herself draped with the items in question on eBay.  Revenge and liberation in one fell swoop – so take that, ex boyfriend!

But wait a minute – who’s hurting whom?  To a more conservative eye, she cut her nose off to spite her face by baring – on a global auction site no less – her assets in a demeaning display.  Undignified perhaps, but understandable all the same?  Relationships are more often emotional affairs than business arrangements so it is to be expected that the behavior of the parties will be illogical at times.  A person braver than I might even suggest a correlation between the frequency of illogical responses and the sex (of the actor) involved - but I won’t venture into that particular minefield.  The response of the scornee in this scenario is what should be our focus.  She eBayed the scorner's clothes.  She set up a website.  She advertised the items for auction on eBay.  She linked the risqué auctions to her new website.  This drummed up traffic to her website.  Immodest yes, but maybe not so illogical after all.

Were the items in question hers to sell?  She claims to have bought most of the items.  But even if she did, surely it was with the intention of giving them to him as a gift.  If so, the clothes became his property at that point.  She did not have title to the items and had no right to dispose of them if that was the case.  She didn’t, that is, unless the relationship was based on the understanding – a sub provision of an implicit termination clause? – that in case of unfaithfulness or other just cause, all gifts given to an offending donee will revert to the affronted doner.   Her disposal of the property would be justified alternatively, if it had been abandoned by its owner.  As she reportedly locked him out by changing the locks and has been impervious – thus far - to his alleged pleas to return, the latter is unlikely on the facts.  If in her rage, she has treated someone else’s property as her own, the legal ingredients for conversion –and perhaps theft – have been satisfied. 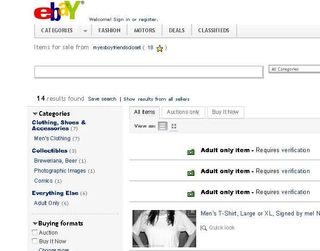 Will the scorner-donee-ex-boyfriend have the gumption to strike back – say by suing his scorned ex-girlfriend for the return of his property?  Might he seek damages for whatever injuries he has sustained from this now very public exacting of revenge?  In that case (if you will forgive the puns) , the shoe would be on the other foot – a suit for an intentional tort or negligence, rather than a case for breach of promise to marry (jilting).  Assuming that he chooses not to press criminal charges, that is.  But it seems the boyfriend has attempted at least one retaliatory blow – the auctions were taken down by eBay staff, allegedly at the instigation of her ex, for being too sexy.  Undeterred, the enterprising Miss re-posted the listings in the ''art'' category.  Although the ‘art’ advertised for sale is the collection of photographs showing her modelling different items (of her ex’s clothing), the ingenious gal still manages thus to accomplish her aim of profiting from, and getting rid of, her ex’s clothes.   As an incentive to buy each photograph, she offers to ‘throw in’ (or should that be ‘throw out’?) the actual item photographed as a ‘gift’.  Contractually, prospective buyers more interested in the ‘gift’ item than the photograph may be reassured in at least two ways.  Either the promise of a ‘gift’, though made before the sale, induced the sale, and for that reason may be deemed a term of the contract (i.e. ‘gift’ is a misnomer as the item is jointly supported by the consideration provided by the price paid for ‘the photograph’).  Alternatively,  the promise of the gift, though unsupported by consideration  -  and to that extent not contractually mandated – may still be enforced by means of an estoppel.  Bottom line, the girlfriend followed up her saucy baseline serve with a volley (that was ultimately met by eBay restricting the most risque pictures to the adult section).

But she may have moved on.  It seems girlfriend has other fish to fry.  Initially motivated by anger, she is now enjoying the attention of being a guest on TV networks here and overseas.  More, she has a new business venture to think about.  "I'm realising that maybe there's something there to explore with a website where I can invite women to also share their breakup stories and maybe also give them the opportunity to sell products and things like that as well," she has reportedly said.  With careful execution, perhaps the conversion of her website into a portal for jilted lover-sellers will not create an exponentially greater liability minefield.

Of such a budding entrepreneurial empire however, one can only caution: buyers beware – the scorners may strike back!  The Machiavellian tangles of sweet revenge reach far.

Listed below are links to weblogs that reference Killing Two Birds With One e-Bay: Boyfriends, Buyers Beware.: