On a day like today, when the first icy (45° F) blast of winter is coming down the verdant Brazos Valley, chilling the rattlesnakes and rattling the Mexican junipers at Château Snyder, it's nice to sit in front of a fire with a steaming Tom & Jerry and think about . . . chicken feet. 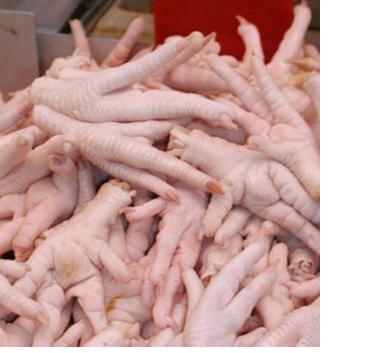 The case takes us back to Thanksgiving 1943, when wartime price controls have led to a serious shortage of meat (and lots of other things) in the U.S.  Because turkeys are in short supply, prices naturally tend to rise.  The Roosevelt Administration responds with the Emergency Price Control Act of 1942, which makes it a criminal offense to sell certain things (including turkeys) prices above a price "established" by the Office of Price Administration.  Because that price is fairly low, demand for turkeys at Thanksgiving 1943 far exceeds the supply.

The defendant operates a wholesale meat and poultry business in New York City.  In prior years it has usually received 100-150 rail cars of turkeys, but in 1943 it only gets one (1) car, and must decide how to divide that relative handful among its customers.  Because it can't raise prices, it decides to bundle the turkeys with chicken feet, chicken skin, and chicken gizzards, so that its customers who buy turkeys must also buy the other products.

The defendant is indicted.  The prosecution claims that by tying the turkeys to other products of dubious value the seller had violated the Price Administrator's regulations, which provided:

Price limitations set forth in this Revised Maximum Price Regulation No. 269 shall not be evaded whether by direct or indirect methods, in connection with any offer, solicitation, agreement, sale, delivery, purchase or receipt of, or relating to, the commodities prices of which are herein regulated, alone or in conjunction with any other commodity, or by way of commission, service, transportation, or other charge, or discount, premium, or other privilege or other trade understanding or otherwise.

The jury convicted and the Second Circuit affirmed.  The Supreme Court -- perhaps still not as friendly and accomodating to economic regulations as it would later become -- reversed the conviction 5-3 (Jackson did not participate), although the justices issued four separate opinions.  Relying heavily on the fact that the Administrator in other regulations had specifically mentioned "tying agreements" but did not do so in Regulation 269, Justice Murphy,Stone, Rutledge, Frankfurter, and Douglas all more or less agreed that a tying arrangement in which the goods had some value was not an "evasion" of the regulations, although Douglas and Rutledge (joined by Frankfurter) wrote concurrences as well.  Black wrote the dissent, joined by Burton and Reed.

It's interesting that only ten ears after unanimously striking down poultry price regulations in A.L.A. Schechter Poultry Corp. v. United States, 295 U.S. 495, 55 S. Ct. 837; 79 L. Ed. 1570  (1935), not a single justice even questioned the government's authority to set the price of every turkey in the United States.  As Mr. Dooley noted, "No matther whether th' constitution follows th' flag or not, th' supreme coort follows th' iliction returns.”

P.S. In case you're wondering what value chicken feet would have, here's a tasty recipe..

Listed below are links to weblogs that reference Happy Thanksgiving!: