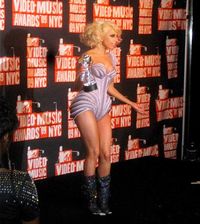 A Google search turned up over 1000 stories about the law suits involving Lady Gaga (pictured) and her former producer and ex-lover, Rob Fusari.  None that I could find linked to any court filings, but at least Christopher John Farley of the Wall Street Journal's blog has summarized Fusari's suit  Farley provides details that are annoyingly absent from most of the other 1000.

According to Farley, Fusari filed suit last Wednesday against two LLC's controlled by Lady Gaga (Ms. Gaga?).  The suit alleges both breach of contract and breach of fiduciary duties.  But that doesn't get your lawsuit 1000 Google hits.  It also alleges a romance with the performer/songwriter and contends that Mr. Fusari was cut out of his rightful share of Lady Gaga's profits when the relationship soured.  He seeks $5 million (the New York Times puts the damages sought at $30.5 million here) and perhaps a remedy for a broken heart.  Other articles suggest that one of Fusari's claims is that he was responsible for coming up with Lady Gaga's stage name (her real name is Stefani Germanotta).  Farley reveals that it was actually Mr. Fusari's cell phone that came up with the handle.  Business Week provides the further detail that Mr. Fusari claims a contractual entitlement to 20% of the Lady Gaga's earnings from her early recordings.

Business Week also reports on Lady Gaga's response, which came on Thursday in the form of her own lawsuit (apparently not just counterclaims).  Both suits were filed in New York's Supreme Court.  Lady Gaga's suit alleges that any agreement with Fusari was illegal because he was not a licensed employment agent. Bloomberg.com provides the further detail that Lady Gaga alleges that her agreement with Fusari is "void and unenforceable" apparently because it runs afoul of laws in New York and New Jersey intended to "protect employees from predatory and financially abusive practices."

Celebrity Contracts, In the News | Permalink

Listed below are links to weblogs that reference Lady Gaga and Former Producer Trade Breach of Contract Suits: