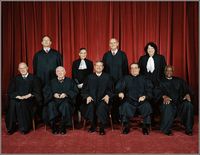 As the ever-reliable SCOTUSblog reports, on Friday, the U.S. Supreme Court announced that it would review Rent-A-Center West, Inc. v. Jackson, a case decided by the Ninth Circuit last September.  The NInth Circuit opinion is available here.

In the case, Plaintiff Antonio Jackson brought a claim in the federal district court claiming race discrimination and retaliatory termination.  Rent-A-Center moved to dismiss and compel arbitration pursuant to a "Mutual Agreement to Arbitrate Claims" that the parties had signed and which specifically lists discrimination claims among those subject to arbitration.  Noting that the Arbitration Agreement gave the arbitrator exclusive powers to interpret it and to determine its enforceability, the District Court granted the motion to dismiss, unconvinced by Jackson's argument that the Agreement is unconscionable.

The Ninth Circuit vacated that dismissal and remanded, finding that where a party asserts that there was no reasonable assent to an arbitration agreement because that agreement is both substantively and procedurally unconscionable, the question of unconscionability is for the court.  The Ninth Circuit further found that, although the District Court properly rejected one of Mr. Jackson's arguments for the substantive unconscionability of the Agreement, it did not address his other two arguments.

There was a dissenting opinion on the Ninth Circuit, which may foretell what the Supreme Court will find.  Dissenting Judge Hall found that the Agreement was, in anything, more favorable to employee interests than are most such agreements.  The upshot of the Ninth Circuit opinion, said Judge Hall, will be mini-trials in the district court prior to the arbitration proceedings to which the parties agreed for any party who is clever enough to challenge the arbitration agreement on unconscionability grounds.

I will find this case especially interesting to watch and may teach it if the Supreme Court has interesting things to say on the subject, as I find that the issue of the unconscionability of binding arbitration in employment agreements is one that frequently elicits passionate exchanges among my students.  The question of the substantive unconscionability of such agreements is a complex one, and perhaps it is one for which first-year law students usually have inadequate information.

Many if not most of my students have worked before coming to law school and so they have had the experience of arriving for their first day of work and then being told that they must sign a stack of forms, including one that provides for binding arbitration.  Very few people have any bargaining power at that stage in their employment history.  The situation strikes my students as fundamentally unfair.

However, many students defend the practice, pointing out that arbitration also has advantages for employees and that the deal is not substantively unconscionable.  Moreover, the savings to employers can translate into savings to consumers as a whole.  It will be interesting to see how the Supreme Court does the dance this time around, but I'm predicting a unanimous reversal.

Listed below are links to weblogs that reference Supreme Court to Hear Unconscionability Challenge to Arbitration Clause:

I'm afraid I don't follow the transition from the 3rd to last to the 2nd to last to the last paragraphs. Are you saying that lack of bargaining power is substantive unconscionability? My understanding is that it is procedural.

Jason, you are quite right. The transition is by no means clear.