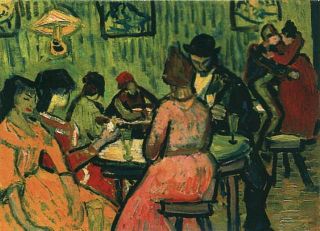 The Fourth in a Series of Posts by

One of the things I took away from Elizabeth Mertz’s

interesting book The Language of Law School was that Contracts professors have a tendency to squelch their students’ moral intuitions in the process of teaching critical thinking and legal rules.  After reading this I resolved to hear students out when they react with “it’s not right” or “it’s not fair”, while at the same time engaging with their moral sense and challenging them to consider the dialectical tensions that are ever-present in seemingly simple questions of right and wrong.

Yesterday a session on illegal contracts provided my students with an opportunity to wander in this territory.  The case at issue, Carroll v. Beardon, involves a contract for one madam to sell her house of ill repute to another.  The court enforces the note and mortgage obliging the buyer topay the remainder of the sale price (we don’t know if the buyer madam was eventually foreclosed on) based on the notion that the seller was not an active participant in the business, at least not after she sold it.

The first question students raised was why the parties did not end up in criminal court as a result of airing their dirty laundry (so to speak) in the civil case, as happened to the two partners in the Highwaymen’s case.  One can only assume that the judge and other citizens of the county all found the business at issue distasteful but tolerable, and the parties and their lawyers regarded the risk as minimal.  This thought raises a number of interesting questions about malumprohibitum and whether the legal system can occasionally look the other way when legal rules are perceived either as illegitimate or at least not worthy of strict enforcement.

This thread then led to several equally interesting questions, such as whether merely selling an illegal business would constitute a crime, and whether it made a difference that the seller received payments over time on her Note, and thus continued profiting in some sense from the trade.  These questions provided a useful opportunity to point out the seamless nature of law practice, and the need to be on the lookout for issues that clients may not have considered, most especially the prospect of jail time.

Also interesting was the question of the lawyer’s duty when her client seeks legal advice about the sale of an illegal business.  This provided me with yet another opportunity to venture into a subject ordinarily taught by one of my colleagues.  Many students approach this question with the intuition that if a client is guilty of a crime, assisting them in any way is wrong, and perhaps we should even report them to the authorities.  Here is a nice example that might be viewed simplistically and incorrectly as differentiating between what is moral and what is legal.  The presumption of innocence, the unequal burden of proof placed on the awesome power of the state, and the freedom from self-incrimination are all moral as well as legal principles, that obviously come into tension with the basic moral notion of wanting to see wrongdoers punished.  A lawyer’s role in advising an admitted criminal to my mind is profoundly moral, as well as instrumentally legal.  Nevertheless, the idea of counseling a client who confesses past sins is troubling to students, for reasons we should not too hastily dismiss.

Listed below are links to weblogs that reference Alan White on Public Policy and Pedagogy::

As a Seattle business lawyer, I often counsel clients as to the morality of what they are pursuing. They often react with childlike fear and shame, and this kind of advice, I believe, does them immense good. They gain respect for the law, and they reset their own moral compass. Sometimes, the advice is as simple as, "you don't want to be any part of something like that." Or, when they want to put tricky things into a contract, I tell them, "Hold on, this is a summary of an understanding, not a subterfuge." Its amazing how fast they back down.