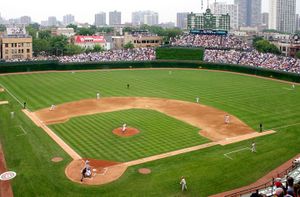 Last week's Limerick addressed the famous dictum of Dodge v. Ford Motor Corp., in which the court reminded Henry Ford that his primary goal ought to be shareholder wealth maximization. In discussing that case, we cautioned that there is more to business associations than shareholders. Rather, as Lynn Stout properly emphasizes, boards of directors owe duties to multiple stakeholders. One case that illustrates this principle is the Barlow case, discussed on this blog here. An even better illustration is Shlensky v. Wrigley.

Shlensky tried to get Wrigley, the owner of the Cubs, to install lights at Wrigley field (pictured) so that the Cubs could play before larger crowds at night games. Shlensky faced a problem. How could he possibly prove that the Cubs could attract more spectators to night games than they could to day games? After all, that would require some comparable sports team that plays in a similar city, and how was he supposed to find another major league baseball team that played in a city like Chicago?

What? White Sox? Oh, yeah. Turns out, Shlensky proferred evidence that people were more inclined to go to Sox games at night than they were to go to Cubs games during the day when the two teams played on the same day. Wrigley responded not with a challenge to Shlensky's economic analysis but with concerns about the effect of night baseball on the Wrigleyville neighborhood and with a lovely little bit of arcane ideology: "Baseball is a daytime sport." As Neo (Keanu Reeves) might say, "Woh!"

The court accommodated Wrigley by hypothesizing what a decent basis for refusing to install lights at Wrigley Field might look like, and on that basis, Shlensky's complaint was dismissed.

As Wrigley explained to the court,
Pro ball is a daytime sport.
Night ball you can see
Down at Comiskey
Where the teams out for profit cavort.

Listed below are links to weblogs that reference Business Associations Limerick of the Week: Shlensky v. Wrigley: