The Military's "homosexual ban" is resurfacing as an issue these past few days.  We've previously blogged about it here and here.

Last week's Saturday Night Live skit noting that Obama has failed to deliver repealing "don't ask, don't tell," DADT (as well as other initiatives) has been getting some press, such as in WaPo here and Alex Koppleman on Salon here. 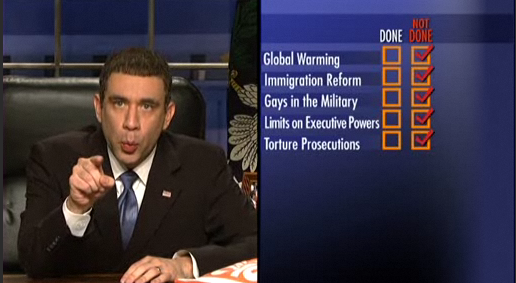 Yesterday, New York's junior Senator Kirsten Gillibrand argued in Politico here that the "right time" is "now" to repeal DADT.  She stated that Senate hearings will soon be held on DADT, the first hearings in sixteen years.

The House of Representatives Bill, HR  1283, is entitled the "Military Readiness Enhancement Act of 2009." Introduced last March, it would "amend title 10, United States Code, to enhance the readiness of the Armed Forces by replacing the current policy concerning homosexuality in the Armed Forces, referred to as `Don't Ask, Don't Tell', with a policy of nondiscrimination on the basis of sexual orientation."

A stimulating 90 minute panel discussion on the policy and bill is available as video and MP3 on the ACS website here.   Virtually missing from the panel presentation (and panelists), however, was the gendered perspective, see here.

Con Law Prof Douglas Kmiec of Pepperdine can be viewed on the popular comedy show "The Colbert Report" in the April 16, 2009 episode here.   Kmiec appeared on the show to promote his book, Can a Catholic Support Him? Asking the Big Question about Barack Obama, released last September.   But the main topic of discussion was same-sex marriage.

Kmiec appears at the conclusion of the show - - - after Colbert's parody of the National Organization for Marriage advertisement, which Frank Rich discussed in his NYT column today here.  Kmiec's argument on the Colbert show is that the state should not be in the business of marriage, but should protect and support certain relationships, including it seems same-sex couples, and excluding, it seems, polygamous ones.  Marriage, Kmiec seems to say, is a religious affair which should be separate from the state.  Kmiec thus comes very close on the show to arguing for a marriage abolitionist position.