The New Yorker has a regular feature that provides a cartoon drawing requiring a caption; the March 1, 2010 contest (#229) with its drawing by Paul Noth might inspire some contributions from ConLaw buffs.  Enter at New Yorker website here.   The deadline is 11.59 pm Sunday, February 28, 2010; 250 character limit.

Could this be from one of your students?

A bit of humor, or perhaps not:

It had to happen - - - and in case you haven't heard, it has: SCOTUS Fantasy League.

The Rules are simple. For each case the Supreme Court grants cert, predict:

At the end of the Term, the Associate Justice who predicts the most cases correctly will be confirmed as the Chief Justice of the Fantasy Supreme Court League....

The statute, Act 1495, defines an "imitation firearm" as

a toy that is identical in appearance to an original firearm that was manufactured,designed, and produced after 1898, including only:
(1) Air-soft guns firing nonmetallic projectiles;
(2) Replica nonguns; and
(3) Water guns

"Imitation firearm" does not include:
(1) A nonfiring, collector replica of an antique firearm developed before 1898;
(2) Traditional BB, paintball, or pellet-firing air guns that  expel a projectile through the force of air pressure; or
(3) A device:
(A) For which an orange solid plug or marking is permanently affixed to the muzzle end of the barrel for a depth of not more  than six millimeters (6 mm);
(B) For which the entire exterior surface is predominately colored other than black, brown, blue, silver, or metallic;or
(C) That is constructed of transparent or translucent materials that permit unmistakable observation of the complete contents of the device.

Perhaps this will be the next Second Amendment challenge after McDonald v. City of Chicago?

USA Today's article on Justice Stevens reports he is keeping his retirement cards "close to his robes," although at age 89 it is "no secret" he might leave the Court. 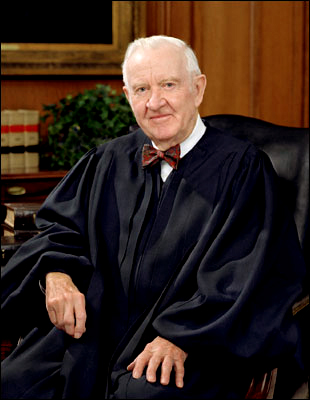 The piece by Joan Biskupic is based on a 75 minute interview with Justice Steven and shares a number of interesting quotes:

"We're getting to a point that our cases are revisiting issues that I wrote on 10, 20, 30 years ago," he says. "I really have felt pretty good about re-reading the opinions I wrote many years ago. I have to confess that."

There is also an interactive feature by Joan Biskupic on all of the Justice's questioning styles during oral arguments:

Not yet updated to reflect the newest SCOTUS Justice, Secret Lives of the Supreme Court, published in 2009 and subtitled "What Your Teachers Never Told You About America's Legendary Justices," is a bit too scattered for engrossing beach/cabin/summer reading, but suitable for forays while waiting for a ferry or an airplane - - - and anticipating the start of the academic year. 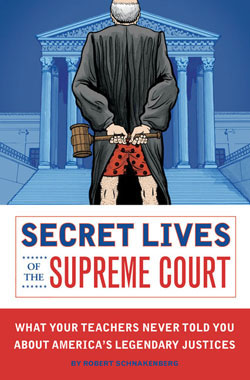 There are moments of judicial interpretation in Secret Lives, none of which would be startling to a conlaw prof or good student, and passages of political intrigue, most of which are familiar.  Yet I'll admit I somehow missed Chief Justice Burger's views on the Second Amendment, voiced in a 1991 interview: he believed the Second Amendment was a "fraud, I repeat the word fraud, on the American public" and despite his supposed law and order orientation, advocated for strict gun control laws (p. 174). However, such insights are obviously not the point of a book entitled Secret Lives.  As advertised, the largest share of the book concerns the more personal predilections of the justices.

The historical material does put some of our present notions into perspective.  A Justice who probably suffered from Alzheimers?  A Justice who flubbed the administration of the Presidential oath?  A Justice who was rumored to be gay?  A Justice believed to be the "most devout Catholic" ever to sit on the Court?  According to this book, the answers are not (only?) members of the Rehnquist or Roberts Courts.

For those interested in more contemporary matters, it might be worthwhile to know that Rehnquist's name translates to "reindeer twig" in Swedish and that Roberts seems to have disliked recently deceased pop-icon Michael Jackson.  And if you want to know Scalia's favorite pizzeria, Kennedy's favorite Shakespeare play,  Ginsburg's favorite mystery authors, and Breyer's favorite "old-time radio program" as well as Stevens' daily lunch and Thomas' cars and vanity license plate, then this is certainly a book worth a look.

In the next edition, one presumes there will be unexpected revelations about Sotomayor.  Perhaps we will finally learn her favorite ice cream flavor; a detail the confirmation hearings seemed to have neglected.