Should any of the SCOTUS Justices Recuse?

The seemingly persistent question of the type of bias of SCOTUS Justices that should merit recusal has resurfaced again.

Recall that the Code of Conduct for United States Judges does not apply to the Justices of SCOTUS, a situation unchanged by the amended code effective March 2019. In his end-of-year Report in 2012, Chief Justice Roberts seemingly argued that there was no need to specifically include the Justices and addressed (albeit somewhat obliquely) some of the ethical concerns that had arisen. For example, Justice Alito had raised concerns when he appeared at an "event" for the The American Spectator, described as a "right wing magazine" that was behind the attempts to impeach Bill Clinton, that its publisher leads the “Conservative Action Project,” formed after President Obama’s election, to help lobby for conservative legislative priorities, elect Republicans and block President Obama’s judicial appointments.  The keynote speaker at the event was then-Rep. Michele Bachmann (R-MN).  Additionally, there were concerns regarding Justice Thomas's financial situation, including acceptances of financial gifts and nondisclosure of his wife's income.

Statements and relationships, especially pronounced in these contentious times, also give rise to concerns regarding bias and the recusal remedy.  Justice Ginsburg's comments about presidential candidate Donald Trump labeling him a "faker" caused controversy and invited comparisons with the late Justice Scalia's remarks and relationship with a sitting Vice President and his refusal to recuse himself from a case involving the VP which Scalia himself described as "heroic" in an interview.  Later, a scholar argued that Justice Kavanaugh should recuse himself in a variety of cases based on Kavanaugh's statements during his confirmation hearing.

Lately, two situations have provoked controversy.  The first involves Justices Sotomayor and Ginsburg. It seemingly springs from Justice Sotomayor's dissent from the issuance of a stay in Wolf v. Cook County, on the public charge policy, which we discussed here. The President, in tweets and in a speech in India, criticized Sotomayor — and added Justice Ginsburg (who had not joined Sotomayor's dissent)  — calling on them to recuse themselves "on all Trump, or Trump-related matters!"  The tweet itself cites Laura Ingraham and FoxNews, and as journalist Matthew Gertz noted, the President's tweet replicates the words of the broadcast, which referenced Ginsburg's 2016 "faker" comment.

The second situation involves Justice Thomas's wife, Ginni Thomas, who reportedly was advising Trump on people in federal employment who should be "purged" as disloyal to the President and who should be hired to replace them.  As the New York Times subsequently reported:

Among Ms. Thomas’s top targets have been officials at the National Security Council, the former head of the White House personnel office, Sean Doocey, and other top White House aides. Another target was Jessie K. Liu, who recently left her job as the U.S. attorney for the District of Columbia for a job in the Treasury Department that was later withdrawn by the White House.

Ms. Thomas, a politically active conservative who for nearly seven years has led a group called Groundswell, also successfully lobbied for a role for Kenneth T. Cuccinelli II, the former attorney general of Virginia who is now the acting deputy secretary of homeland security.

This has led at least one organization, Take Back the Court, to write a letter requesting that Justice Thomas recuse himself from matters before the Court involving Trump.

The overall effect may be to (further) erode the legitimacy of the courts in general and SCOTUS in particular.

Meanwhile, rereading Canons 4 and 5 of the Code of Conduct for United States Judges and the considerations relating to bias, the appearance of impartiality, and political participation might anchor the conversations about bias. 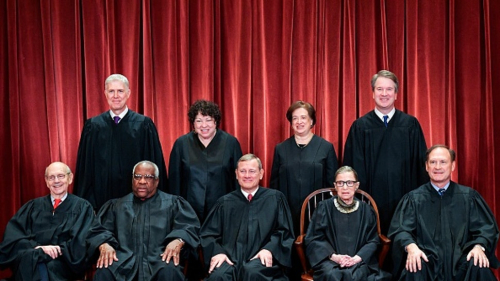