In an extensive opinion in Jones v. Governor of Florida, the Eleventh Circuit found that the Florida legislature's imposition of payment of all fines, fees, and restitution connected with a felony conviction as a necessary precondition for re-enfranchisement violated the Fourteenth Amendment's Equal Protection Clause.

any disqualification from voting arising from a felony conviction shall terminate and voting rights shall be restored upon completion of all terms of sentence including parole or probation.

Recall that in October 2019, United States District Judge Robert Hinkle of the Northern District of Florida held that the Florida statute requiring payment of fines, fees, and costs in order for a person convicted of a felony to have their voting rights restored is unconstitutional and should be enjoined, providing that persons affected should have the opportunity to prove their inability to pay.

The Eleventh's Circuit per curiam opinion of 78 pages concluded that the statute's requirement of payment of "legal financial obligations" (known as LFO) could not be sustained under heightened scrutiny.  While wealth classifications in equal protection do not generally merit heightened scrutiny, the Eleventh Circuit noted that

But the Supreme Court has told us that wealth classifications require more searching review in at least two discrete areas: the administration of criminal justice and access to the franchise. M.L.B. [ v. S.L.J.], 519 U.S. at 123  [1996] (“[O]ur cases solidly establish two exceptions to that general rule [of rational basis for wealth classifications]. The basic right to participate in political processes as voters and candidates cannot be limited to those who can pay for a license. Nor may access to judicial processes in cases criminal or ‘quasi criminal in nature’ turn on ability to pay.” (citations omitted)). Because Florida’s re-enfranchisement scheme directly implicates wealth discrimination both in the administration of criminal justice and in access to the franchise, we are obliged to apply some form of heightened scrutiny. Florida has implemented a wealth classification that punishes those genuinely unable to pay fees, fines, and restitution more harshly than those able to pay—that is, it punishes more harshly solely on account of wealth—and it does so by withholding access to the franchise. The observation that Florida may strip the right to vote from all felons forever does not dictate that rational basis review is proper in this case. To the contrary, settled Supreme Court precedent instructs us to employ heightened scrutiny where the State has chosen to “open the door” to alleviate punishment for some, but mandates that punishment continue for others, solely on account of wealth. 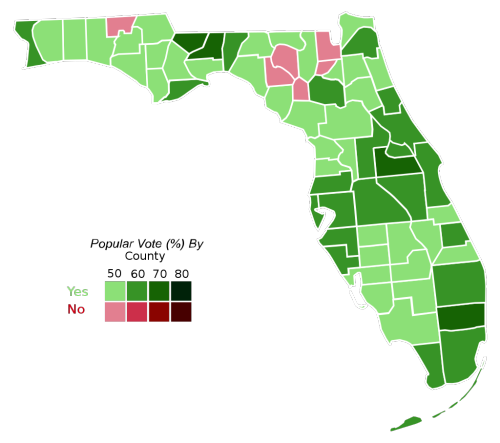 once a state provides an avenue to ending the punishment of disenfranchisement—as the voters of Florida plainly did—it must do so consonant with the principles of equal protection and it may not erect a wealth barrier absent a justification sufficient to overcome heightened scrutiny.

The court then applied the form heightened scrutiny from Bearden v. Georgia (1983) including its four considerations: (1) “the nature of the individual interest affected”; (2) “the extent to which it is affected”; (3) “the rationality of the connection between legislative means and purpose”; and (4) “the existence of alternative means for effectuating the purpose.” The court rather expeditiously analyzed the individual's interests as great, the state's interests as minor, and noted the lack of realistic alternatives.

Further, the court rejected Florida's argument that the plaintiffs must demonstrate discriminatory intent:

The Eleventh Circuit opinion concluded that although to the "extent a felon can pay LFOs, he or she must," but clearly affirmed the district court's order enjoining the state "from preventing the plaintiffs from voting based solely on their genuine inability to pay legal financial obligations."

[image: Florida vote on Amendment 4 via]