Both cases involve an application of the First Amendment's "ministerial exception" first accepted by the Court in 2012 in Hosana-Tabor Evangelical Lutheran Church and School v. EEOC.  In the unanimous decision in Hosanna-Tabor, the Court found that the school teacher Cheryl Perich was tantamount to a minister. Thus, under both Religion Clauses of the First Amendment, as a "minister" her employment relations with her church school employer were eligible for a "ministerial exception" to the otherwise applicable employment laws, in that case the Americans with Disabilities Act.

But who is a "ministerial" employee subject to the exemption from employment laws?

Chief Justice Roberts' opinion for the Court in Hosanna-Tabor declined to provide a test for deciding whether or not an employee was within the ministerial exception. However, the Court did extensively analyze Cheryl Perich's employment. And the lower courts have been struggling with how to analogize to the Court's conclusions regarding the "called teacher" Perich.

In the unpublished and very brief panel opinion in Morrisey-Berru, the court stated that the Court in Hosanna-Tabor considered four factors in analyzing whether the exception applied:

Considering the totality of the circumstances in this case, we conclude that the district court erred in concluding that Morrissey-Berru was a “minister” for purposes of the ministerial exception. Unlike the employee in Hosanna-Tabor, Morrissey-Berru’s formal title of “Teacher” was secular. Aside from taking a single course on the history of the Catholic church, Morrissey-Berru did not have any religious credential, training, or ministerial background. Morrissey-Berru also did not hold herself out to the public as a religious leader or minister.

Morrissey-Berru did have significant religious responsibilities as a teacher at the School. She committed to incorporate Catholic values and teachings into her curriculum, as evidenced by several of the employment agreements she signed, led her students in daily prayer, was in charge of liturgy planning for a monthly Mass, and directed and produced a performance by her students during the School’s Easter celebration every year. However, an employee’s duties alone are not dispositive under Hosanna-Tabor’s framework. See Biel v. St. James Sch. (9th Cir. 2018). Therefore, on balance, we conclude that the ministerial exception does not bar Morrissey-Berru’s ADEA claim.

Biel, relied upon in Morrisey-Berru's unpublished opinion, was much more contentious. Reversing the district court, the Ninth Circuit panel's opinion in Biel similarly considered four factors from Hosanna-Tabor and applying them to the school teacher Kristen Biel concluded that she was not a ministerial employee. For the panel in Biel, she

by contrast, has none of Perich’s credentials, training, or ministerial background. There was no religious component to her liberal studies degree or teaching credential. St. James had no religious requirements for her position. And, even after she began working there, her training consisted of only a half-day conference whose religious substance was limited. Unlike Perich, who joined the Lutheran teaching ministry as a calling, Biel appears to have taken on teaching work wherever she could find it: tutoring companies, multiple public schools, another Catholic school, and even a Lutheran school.

Also in contrast to Perich, nothing in the record indicates that Biel considered herself a minister or presented herself as one to the community. She described herself as a teacher and claimed no benefits available only to ministers.

Only with respect to the fourth consideration in Hosanna-Tabor do Biel and Perich have anything in common: they both taught religion in the classroom. Biel taught lessons on the Catholic faith four days a week. She also incorporated religious themes and symbols into her overall classroom environment and curriculum, as the school required. We do not, however, read Hosanna-Tabor to indicate that the ministerial exception applies based on this shared characteristic alone. If it did, most of the analysis in Hosanna-Tabor would be irrelevant dicta, given that Perich’s role in teaching religion was only one of the four characteristics the Court relied upon in reaching the conclusion that she fell within the ministerial exception.

And even Biel’s role in teaching religion was not equivalent to Perich’s.. . .

The panel's opinion in Biel was not unanimous. A dissenting judge would have held that Biel was a minister in large part because her teaching duties at a Catholic school included religious teachings; the judge was "struck by the importance of her stewardship of the Catholic faith to the children in her class. Biel’s Grade 5 Teacher title may not have explicitly announced her role in ministry, but the substance reflected in her title demonstrates that she was a Catholic school educator with a distinctly religious purpose."

The petition for rehearing en banc was denied, but with a lengthy dissenting opinion  by Judge R. Nelson joined by an addition eight Ninth Circuit Judges - - - that's nine Judges dissenting.  Judge Nelson's opinion argues that the panel opinion in Biel (as well as the opinion in Morrisey-Berru) had taken the narrowest possible interpretation of Hosanna-Tabor, so narrow as to have "excised the ministerial exception, slicing through constitutional muscle and now cutting deep into core constitutional bone." For the dissenting judges,

In turning a blind eye to St. James’s religious liberties protected by both Religion Clauses, we exhibit the very hostility toward religion our Founders prohibited and the Supreme Court has repeatedly instructed us to avoid. 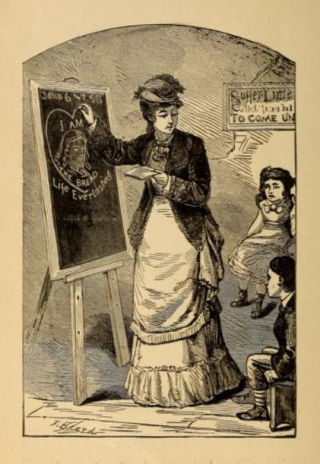 With the Court's grant of certiorari in Biel and Morrisey-Berru, perhaps there will be more clarity regarding the factors of Hosanna-Tabor and how they should be applied to teachers in private schools run by religious organizations.

The facts of Biel may strike many as particularly sympathetic: Kristen Biel was diagnosed with breast cancer and terminated when she said she would have to take some time off work when she underwent chemotherapy. St. James's principal, Sister Mary Margaret, told Biel it was not "fair" "to have two teachers for the children during the school year.” If she had worked for a nonreligious school, Biel would have been protected by the Americans with Disabilities Act.

The Court is set to decide whether Biel and seemingly almost every teacher at a private school operated by a religious organization should be excluded from the employment protections afforded other workers.

[image "Chalk Lessons, or the Black-board in the Sunday School. A Practical Guide for Superintendents and Teachers" by Frank Beard (1896), via]