Another Defamation Lawsuit Against Trump Connected to Sexual Misconduct

In a 28 page complaint filed in New York state courts opening the case Carroll v. Trump, E. Jean Carroll has sued the president for one count of defamation.

The argument is that the president is "sued here only in his personal capacity" and implicitly that there is no presidential immunity, noting cases in which President Trump has been a plaintiff in his personal capacity, and further citing "a related case" of Zervos v. Trump in which Trump is a defendant. Recall that a New York appellate court considering Zervos earlier this year held that Trump was not immunized from defending a lawsuit in state court. 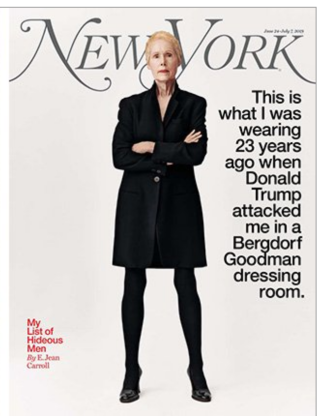 Interestingly, this paragraph avers that Trump is a "resident" of New York; Trump announced a few days ago that he had filed a "declaration of domicile" in Florida. There are other aspects of personal jurisdiction and there is no amount in the complaint that might satisfy the threshold for removal to federal court for diversity purposes.

The complaint provides a compelling explanation of E. Jean Carroll's silence about the 1995 or 1996 event in which she alleges Trump raped her in a department store dressing room as well as the rationales for changing her mind, including the death of her mother and the burgeoning #MeToo movement response to Harvey Weinstein.

As to the substantive allegations, Carroll highlights three statements — made on June 21, 22, and 24 — that were widely disseminated and accused Carroll of lying about the incident, of inventing the incident for book sales, of inventing the incident for a "political agenda," of lying about incidents with other men, and stating that Trump did not know her, had never met her, and that she was "not his type."  On reputational damages, the complaint avers that since the defamation she lost the "support and goodwill" of many of the readers of her advice column, resulting in "roughly 50% fewer letters" to which she could respond, noting that as an advice columnist she requires a "steady flood of compelling letters" seeking her advice.

Expect Trump's answer — or more probably motion to dismiss — to raise the same immunity defense as in Zervos despite the appellate court decision and perhaps a jurisdictional argument.