In an opinion in Jones v. DeSantis, United States District Judge Robert Hinkle of the Northern District of Florida held that the Florida statute requiring payment of fines, fees, and costs in order for a person convicted of a felony to have their voting rights restored is unconstitutional and should be enjoined.

any disqualification from voting arising from a felony conviction shall terminate and voting rights shall be restored upon completion of all terms of sentence including parole or probation. 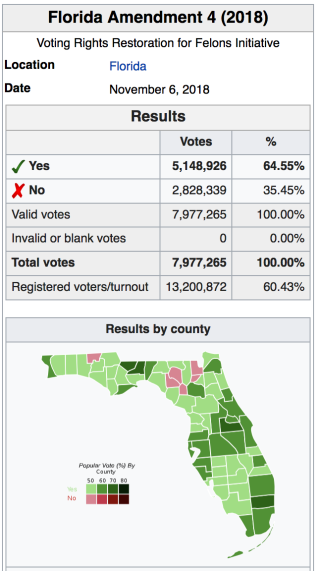 Judge Hinkle first addressed Florida's motion to dismiss based on lack of standing and motion to abstain, finding them without merit. Judge Hinkle then discussed whether or not Amendment 4 authorized the statute extending the conditions to all restitution, fines, and fees, acknowledging that "the last word will belong to the Florida Supreme Court," on the matter of that interpretation. However, for purposes of the issue of constitutionality at this stage, the judge assumed that " “all terms of sentence” includes fines and restitution, fees even when unrelated to culpability, and amounts even when converted to civil liens, so long as the amounts are included in the sentencing document."

While the court acknowledged that a state can deny persons convicted of a felony the right to vote under the Fourteenth Amendment as construed by the Court in Richardson v. Ramirez (1974), here the state had amended its constitution not to do so, but with an exception for those persons convicted of felonies who could not meet their financial obligations. Thus, the Equal Protection Clause is implicated. On this point, Judge Hinkle found Eleventh Circuit precedent was clear, citing Johnson v. Governor of Florida, 405 F.3d 1214 (11th Cir. 2005) (en banc). The court quotes the en banc court in Johnson stating:

Access to the franchise cannot be made to depend on an individual’s financial resources. Under Florida’s Rules of Executive Clemency, however, the right to vote can still be granted to felons who cannot afford to pay restitution. . . . Because Florida does not deny access to the restoration of the franchise based on ability to pay, we affirm the district court’s grant of summary judgment in favor of the defendants on these claims.

[emphasis in original]. For Judge Hinkle, this is both the "starting point of the analysis of this issue, and pretty much the ending point."

As support for Johnson and further explication of the standard of review under equal protection doctrine, Judge Hinkle reasoned:

In one, M.L.B. v. S.L.J., 519 U.S. 102 (1996), the Court noted the “general rule” that equal-protection claims based on indigency are subject to only rational-basis review. This is the same general rule on which the Secretary [of State of Florida] places heavy reliance here. But in M.L.B. the Court said there are two exceptions to the general rule.

The first exception, squarely applicable here, is for claims related to voting.  The Court said, “The basic right to participate in political processes as voters and candidates cannot be limited to those who can pay for a license.”  The Court cited a long line of cases supporting this principle.  In asserting that the Amendment 4 and SB7066 requirement for payment of financial obligations is subject only to highly deferential rational-basis scrutiny, the Secretary ignores this exception.

The second exception is for claims related to criminal or quasi-criminal processes. Cases applying this exception hold that punishment cannot be increased because of a defendant’s inability to pay. See, e.g., Bearden v. Georgia, 461 U.S. 660 (1983) (holding that probation cannot be revoked based on failure to pay an amount the defendant is financially unable to pay). Disenfranchisement of felons has a regulatory component, see, e.g., Trop v. Dulles, 356 U.S. 86, 96-97 (1958), and when so viewed, disenfranchisement is subject only to the first M.L.B. exception, not this second one. But when the purpose of disenfranchisement is to punish, this second exception applies. If, after adoption of Amendment 4, the purported justification for requiring payment of financial obligations is only to ensure that felons pay their “debt to society”—that is, that they are fully punished—this second M.L.B. exception is fully applicable.

Another case applying these principles is Harper v. Virginia State Board of Elections, 383 U.S. 663 (1966), which was cited in both M.L.B. and the Johnson footnote. In Harper the Supreme Court said “[v]oter qualification has no relation to wealth.”  The Court continued, “[w]ealth, like race, creed, or color, is not germane to one’s ability to participate intelligently in the electoral process.”  And the Court added, “[t]o introduce wealth or payment of a fee as a measure of a voter’s qualifications is to introduce a capricious or irrelevant factor.” The Secretary says none of this is true when the voter is a felon, but the Secretary does not explain how a felon’s wealth is more relevant than any other voter’s. And Johnson plainly rejected the Secretary’s proposed distinction.

Judge Hinkle's remedy was not to entirely enjoin the enforcement of the statute. Instead, Florida must follow its procedures and amend them if need be to allow indigent persons to demonstrate their inability to pay any restitution, fines, or fees. Nevertheless, this is a victory for those who have argued that the Florida statute undermined Amendment 4.