In a 130 page opinion in Students for Fair Admissions v. President and Fellows of Harvard College, Judge Allison Burroughs upheld Harvard's admissions policy that includes racial considerations. Although Harvard is a private institution and there is not sufficient state action to invoke the Equal Protection Clause of the Fourteenth Amendment, Judge Burroughs noted that it was "subject to the same standards that the Equal Protection Clause imposes upon state actors for the purposes of a Title VI claim," referencing Title VI of the Civil Rights Act of 1964, 42 U.S.C. §§ 2000d et seq.  As Judge Burroughs stated, " the controlling principles articulated by the Supreme Court in Fisher II reflect the sum of its holdings in cases concerning higher education admissions over the last forty years and now guide the application of Title VI in this case," referencing Fisher v. University of Texas at Austin (2016).

Applying strict scrutiny, Judge Burroughs first found that Harvard's interest in the educational benefits that flow from student diversity was compelling, concluding that "Harvard's goals are similar in specificity to the goals the Supreme Court found 'concrete and precise' in Fisher II."

On the more controversial issue of narrowly tailored means-chosen, the judge found there was no undue burden on any particular individual and that individuals were considered on a holistic basis. The judge specifically rejected the plaintiff's claim that the university engaged in "racial balancing." As to race-neutral means, the judge rejected the proffered race-neutral methods such as eliminating early action decisions, eliminating preferences for certain applicants (including legacy and children of Harvard employees), and preferences for economically disadvantaged students as not being "workable" methods for actually achieving racial diversity.

Judge Burrough's conclusion is especially noteworthy: she states that while the Harvard admissions policy satisfies strict scrutiny it is not perfect and administrators might benefit from "implicit bias training;" she discusses the language from Fisher II regarding data-collection and the language from Grutter v. Bollinger regarding the duration of affirmative action programs; and she quotes the esteemed author Toni Morrison of the relevance of race and the President of Harvard, Ruth Simmons on the the importance of diversity.

The plaintiff organization has proved itself determined to litigate this issue and an appeal is likely. But this thorough opinion — with more than 60 pages of factual discussion — will make its reversal a formidable task absent doctrinal changes. 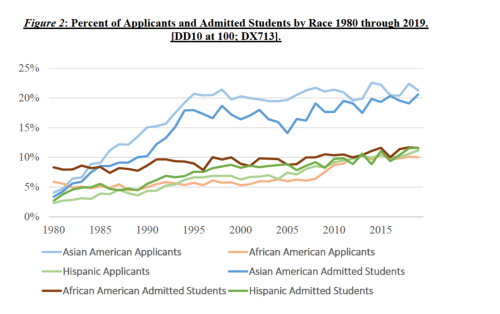 [image from the opinion]