In her Order in Galicia v. Trump, Judge Doris Gonzalez has ordered that President Trump appear for a videotaped deposition prior to trial to provide testimony for use at trial in this tort case.

The plaintiffs brought an action against Donald Trump,  Donald Trump for President, the Trump Organization, and Keith Schiller for events in September 2015 when plaintiffs were protesting Trump's views as he was beginning his campaign for President. Plaintiffs allege  that "several of Defendant Trump's bodyguards, including his confidant and chief security officer Keith Schiller, stormed Plaintiffs, pushed some of them down the sidewalk, using excessive force grabbed the signs from Plaintiffs and converted them to their own use." The case is proceeding to trial on claims of assault and battery, and against Donald Trump on a theory of respondeat superior.  In 2016, a state judge  granted a protective order against a motion to compel Trump's deposition before trial. When the case became ready for trial, plaintiffs issued a subpoena ad testificandum to compel Trump's testimony; Trump moved to quash, arguing that under Clinton v. Jones (1997), a president can only be deposed before trial and at the White House.

Judge Gonzalez began her discussion with a resort to the framers and Marbury v. Madison:

More than 200 years ago our founders sought to escape an oppressive, tyrannical governance in which absolute power vested with a monarch. A fear of the recurrence of tyranny birthed our three-branch government adorned with checks and balances. Chief Justice John Marshall famously stated, [t]he government of the United States has been emphatically termed a government of laws, and not of men. It will certainly cease to be deserve this high appellation, if the laws furnish no remedy for the violation of a vested legal right.” Marbury v. Madison, 1 Cranch 137 (1803). Put more plainly, no government official, including the Executive, is above the law.

However, President Trump argued that his testimony could not be compelled for trial, but only at pretrial as some dicta in Clinton v. Jones indicated, and that in any event, the plaintiffs had waived the President's testimony by not appealing the earlier order finding a motion to compel premature. Further, Judge Gonzalez distinguished a Second Circuit case relied upon by Trump that depositions of "high-ranking officials" should only occur in exceptional circumstances by noting that this was the rule in litigation involving official action rather than the unofficial pre-Presidential action at issue in this case.

Judge Gonzalez ruled that "questions of fact exist" regarding Trump's "exercise of dominion and control over his employee defendants" and ordered President Trump to "appear for a videotaped deposition prior to the trial of this matter and provide testimony for the use at trial." 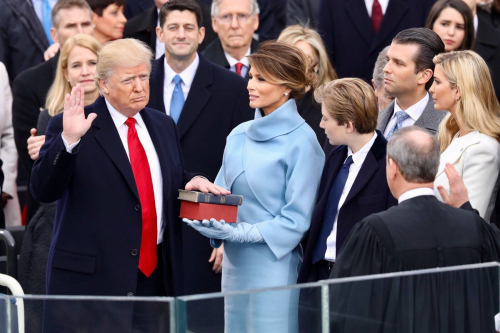