With the news that the House of Representatives has launched an impeachment inquiry, many of us could use some explainers or refreshers on the rarely-used constitutional process of impeachment.

First, the Constitutional text. The United States Constitution provides for impeachment and removal of office for the President and other Executive officers in Article II §4:

The President, Vice President and all civil Officers of the United States, shall be removed from Office on Impeachment for, and Conviction of, Treason, Bribery, or other high Crimes and Misdemeanors.

The House of Representatives shall chuse their Speaker and other Officers; and shall have the sole Power of Impeachment.

The Senate shall have the sole Power to try all Impeachments. When sitting for that Purpose, they shall be on Oath or Affirmation. When the President of the United States is tried, the Chief Justice shall preside: And no Person shall be convicted without the Concurrence of two thirds of the Members present.

Judgment in Cases of Impeachment shall not extend further than to removal from Office, and disqualification to hold and enjoy any Office of honor, Trust or Profit under the United States: but the Party convicted shall nevertheless be liable and subject to Indictment, Trial, Judgment and Punishment, according to Law.

The Constitution does not further detail the processes, but there is the precedent of previous impeachment processes, including those against Presidents Andrew Johnson, Richard Nixon, and William Clinton which were resolved at various stages and none of which led to conviction and removal. There is also the more frequent experience with judicial impeachments.

The Congressional Research Service has two excellent explainers on impeachment. First and of immediate interest is the report entitled The Impeachment Process in the House of Representatives.  It was updated August 2019, and although it is only 15 pages, it is an excellent and substantive discussion of the process and requirements.  A somewhat longer report from 2015 entitled Impeachment and Removal provides an overview including grounds for impeachment and trial in the Senate. As this report also notes, the question of impeachment has been held to be a nonjusticiable political question by the United States Supreme Court in Nixon v. United States, 506 U.S. 224 (1993), a case involving the impeachment of federal Judge Walter Nixon (not President Nixon, who resigned in 1974).

There have also been several good explainers in the media; here are a few:

Amber Phillips, What you need to know about the impeachment inquiry into Trump, Washington Post (September 25, 2019); 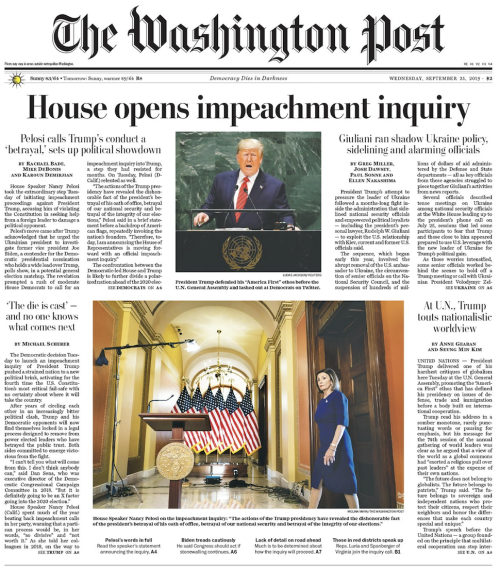