In lengthy and sharply divided opinion in Brush & Nib Studio v. City of Phoenix, the Arizona Supreme Court has held that a custom wedding invitation company and its proprietors have a right to refuse to express to make invitations for same-sex weddings under article 2, section 6 of the Arizona Constitution, providing that "Every person may freely speak, write, and publish on all subjects, being responsible for the abuse of that right," as well as Arizona’s Free Exercise of Religion Act (“FERA”), A.R.S. § 41-1493.01. This right prevailed over the City of Phoenix’s Ordinance, as amended in 2013, which prohibits public accommodations from discriminating against persons based on their status in a “protected” group, which includes a person’s sexual orientation.  Phx., Ariz., City Code (“PCC”) § 18-4(B). As the majority made clear, however, its holding was " limited to Plaintiffs’ creation of custom wedding invitations that are materially similar to those contained in the record," and did not "recognize a blanket exemption from the Ordinance for all of Plaintiffs’ business operations," or reach the question of other wedding services. The court appended illustrative samples in the appendix (and see below). 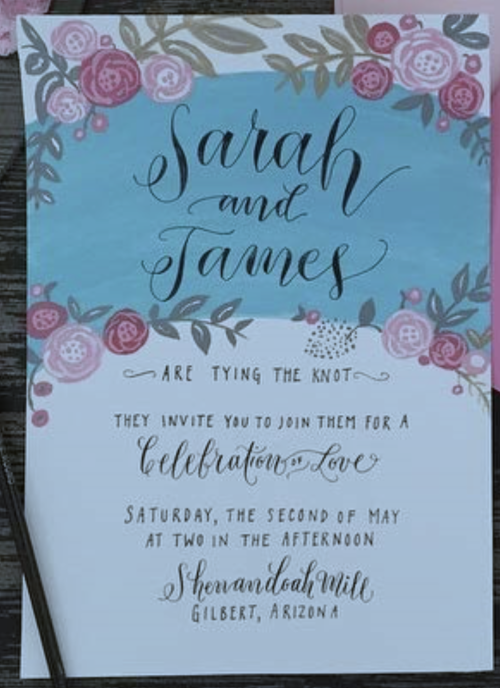 Nevertheless, the majority extensively relies upon United States Supreme Court cases.  The citations include the Court's 2018 opinion in Masterpiece Cakeshop Ltd. v. Colorado Civil Rights Commission, although in Masterpiece there was a conclusion that the Colorado Civil Rights Commission, enforcing its state nondiscrimination statute, expressed hostility on the basis of religion in its adjudication of the case - an issue that is not raised by the multiple opinions in Brush & Nib. The majority traces some of the rationales in the Masterpiece arguments: finding that the same-sex wedding invitations with their art and calligraphy (like the cake-baking) is "art" and speech, and finding that nondiscrimination ordinance seeks to compel their speech in support of beliefs they do not hold, such as same-sex marriage. The majority thus applies strict scrutiny, holding that a nondiscrimination public accommodations law is not a compelling governmental interest, and that such laws target conduct rather than speech and it is therefore not narrowly tailored.

Three of the seven Justices of the Arizona Supreme Court dissented. The dissenting opinion that all three Justices joined found that  there was a tension between "our fundamental values of liberty and equality," but because "the interest in preventing discrimination is compelling, equality prevails when we are dealing with public accommodations such as businesses serving the public." The dissenters also argued that "the majority implausibly characterizes a commercially prepared wedding invitation as “pure speech” on the part of the business selling the product and discounts the compelling public interest in preventing discrimination against disfavored customers."

And while this case is not suitable for certiorari to the Supreme Court, this issue will most likely recur in Arizona given the majority's attempt to limit the decision and the sharp divisions on the court; just as it will be recurring elsewhere.