In its opinion in Knight First Amendment v. Trump, the Second Circuit ruled that the "First Amendment does not permit a public official who utilizes a social media account for all manner of official purposes to exclude persons from an otherwise-open dialogue because they expressed views with which the official disagrees."  The case arose from challenges to the President, Donald J. Trump, blocking users on Twitter. Recall that United States District Judge for the Southern District of New York, Naomi Reice Buchwald, issued a 75 page opinion based on the parties motions for summary judgment (and stipulated facts) concluding that found that the President's Twitter account, @realdonaldtrump, is in violation of the First Amendment when it blocks other Twitter users based on their political views. A unanimous panel of the Second Circuit affirms that decision.

The Second Circuit opinion, authored by Judge Barrington Parker, first considered the state action threshold. The government attorneys interestingly represented the President to argue that his account is nongovernmental. The court rejected the government attorneys' position that while the @realdonaldtrump Twitter account is not independent of Trump's presidency, that the specific act of blocking should not be considered state action. Further, the Second Circuit rejected the argument that because the person of Donald Trump established the account before becoming President and will retain control after he leaves the presidency, the @realdonaldtrump account must be considered "private" and not subject to the First Amendment: "the fact that government control over property is temporary, or that the government does not 'own' the property in the sense that it holds title to the property, is not determinative." The court stated:

The government’s contention that the President’s use of the Account during his presidency is private founders in the face of the uncontested evidence in the record of substantial and pervasive government involvement with, and control over, the Account. First, the Account is presented by the President and the White House staff as belonging to, and operated by, the President. The Account is registered to “Donald J. Trump, ‘45th President of the United States of America, Washington, D.C.’” The President has described his use of the Account as “MODERN DAY PRESIDENTIAL.” The White House social media director has described the Account as a channel through which “President Donald J. Trump . . . [c]ommunicat[es] directly with you, the American people!” The @WhiteHouse account, an undoubtedly official Twitter account run by the government, “directs Twitter users to ‘Follow for the latest from @POTUS @realDonaldTrump and his Administration.” Further, the @POTUS account frequently republishes tweets from the Account. As discussed earlier, according to the National Archives and Records Administration, the President’s tweets from the Account “are official records that must be preserved under the Presidential Records Act.”

Second, since becoming President he has used the Account on almost a daily basis “as a channel for communicating and interacting with the public about his administration.” The President utilizes White House staff to post tweets and to maintain the Account. He uses the Account to announce “matters related to official government business,” including high‐level White House and cabinet‐level staff changes as well as changes to major national policies. He uses the Account to engage with foreign leaders and to announce foreign policy decisions and initiatives. Finally, he uses the “like,” “retweet,” “reply,” and other functions of the Account to understand and to evaluate the public’s reaction to what he says and does. In sum, since he took office, the President has consistently used the Account as an important tool of governance and executive outreach. For these reasons, we conclude that the factors pointing to the public, non‐private nature of the Account and its interactive features are overwhelming. 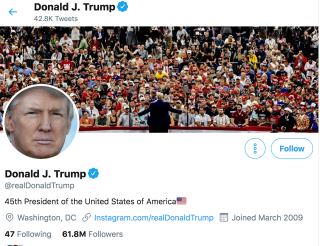 the speech restrictions at issue burden the Individual Plaintiffs’ ability to converse on Twitter with others who may be speaking to or about the President. President Trump is only one of thousands of recipients of the messages the Individual Plaintiffs seek to communicate. While he is certainly not required to listen, once he opens up the interactive features of his account to the public at large he is not entitled to censor selected users because they express views with which he disagrees.

The court also rejected the government's position that the plaintiffs should employ "workarounds" such as creating new accounts, in large part because the government itself conceded that such workarounds burdened speech.

Finally, the Second Circuit rejected the argument that the Twitter account is government speech and thus not subject to the First Amendment. The court stated that while the president's initial tweets are government speech, the interactive features are decidedly not:

Considering the interactive features, the speech in question is that of multiple individuals, not just the President or that of the government. When a Twitter user posts a reply to one of the President’s tweets, the message is identified as coming from that user, not from the President. There is no record evidence, and the government does not argue, that the President has attempted to exercise any control over the messages of others, except to the extent he has blocked some persons expressing viewpoints he finds distasteful. The contents of retweets, replies, likes, and mentions are controlled by the user who generates them and not by the President, except to the extent he attempts to do so by blocking. Accordingly, while the President’s tweets can accurately be described as government speech, the retweets, replies, and likes of other users in response to his tweets are not government speech under any formulation.

The Second Circuit ends with what might be considered a chastisement:

The irony in all of this is that we write at a time in the history of this nation when the conduct of our government and its officials is subject to wide‐open, robust debate. This debate encompasses an extraordinarily broad range of ideas and viewpoints and generates a level of passion and intensity the likes of which have rarely been seen. This debate, as uncomfortable and as unpleasant as it frequently may be, is nonetheless a good thing. In resolving this appeal, we remind the litigants and the public that if the First Amendment means anything, it means that the best response to disfavored speech on matters of public concern is more speech, not less.