In its divided opinion in Virginia House of Delegates v. Bethune-Hill, the Court concluded that the Virginia House of Delegates, one of two chambers in the state legislature, did not have standing to appeal the judgment of the three judge district court that eleven districts in its 2011 redistricting plan were racially gerrymandered and violated the Equal Protection Clause.

Recall that in its previous appearance before the United States Supreme Court, Virginia's 2011 redistricting plan caused the Court to clarify the standard for deciding whether racial considerations in reapportionment violate the Equal Protection Clause. In Bethune-Hill v. Virginia State Board of Elections (2017), the Court affirmed the three-judge court's decision as to one of the districts as constitutionally considering race, but remanded the determination of the constitutional status of the other eleven districts.  It was on this remand that the three-judge court found that these other eleven districts also violated the Equal Protection Clause.

Recall also that at oral argument, the questions of standing to appeal were intermixed with the factually-intense merits, so that details about the processes leading to the actual redistricting map and its impacts complexified the arguments.

The Court did not reach the merits, but decided the case on lack of standing to appeal. As Justice Ginsburg, writing for the majority, phrased it, after the 2018 three-judge court decision, Virginia decided it "would rather stop than fight on," and Virginia did not appeal. However, the Virginia House of Delegates did pursue an appeal.  Ginsburg — joined by Justices Thomas, Sotomayor, Kagan, and Gorsuch — held that the House of Delegates did not have standing to appeal.

The majority held that the House of Delegates had no standing to represent the interests of the State of Virginia. A State has the authority to designate the entities to represent it and in the case of Virginia it has given this authority exclusively to the state Attorney General.

Further, the majority held that the Virginia House of Delegates did not have standing in its own right, as it did not have a distinct injury. "Just as individual members of Congress do not have standing to assert the institutional interests of the legislature, "a single House of a bicameral legislature lacks capacity to assert interests belonging to the legislature as a whole." The Court also rejected specific injury to the House of Delegates because redrawing district lines would harm it.

Justice Alito, writing the dissenting opinion joined by Chief Justice Roberts, and Justices Breyer and Kavanaugh, argued that the House of delegates did experience specific injury in fact, given that a representative represents a specific set of constituents with specific interests and this would be changed by redistricting.

The contentious redistricting in Virginia (as well as other states) is not brought any closer to resolution by the Court's decision, but it does mean that Virginia's choice to end this round of the litigation must be a unitary one. 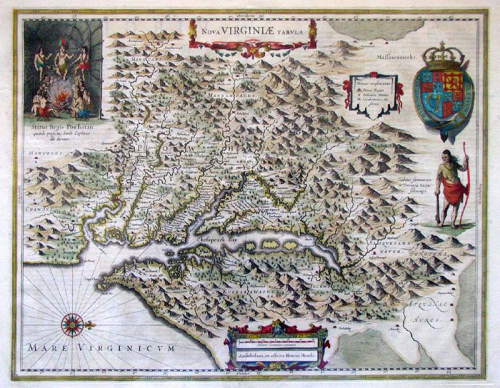 image: map of Virginia circa 1612 via