In its opinion in Flowers v. Mississippi, the Court reversed the decision of a divided Mississippi Supreme Court that there was not a violation of the Equal Protection Clause in the selection of jurors under Batson v. Kentucky (1986).

The Court's opinion by Justice Kavanaugh, and joined by Chief Justice Roberts, and Justices Ginsburg, Breyer, Alito, Sotomayor, and Kagan, stressed the "extraordinary facts" of Flowers and stated the decision sought to simply "enforce and reinforce Batson by applying it" here. Indeed, the jury selection at issue was in the sixth trial of Flowers all prosecuted by the same lead prosecutor.  The Mississippi Supreme Court had reversed one conviction for prosecutorial misconduct, had reversed two other convictions for Batson violations, and two other trials had resulted in "hung juries."  The Court concluded that four "critical facts, taken together" led to the conclusion:

The Court's opinion rehearsed the Equal Protection Clause doctrine that led to Batson, starting as far back as Strauder v. West Virginia (1880).  The Court relied on its most recent Batson case, also a capital case, Foster v. Chatman (2016), and outlined the types of evidence relevant in a Batson challenge. It then discussed the evidence in detail as guided by the "critical facts" above. While the Court's opinion repeated that the case was "extraordinary" and that it was the combination of facts, Justice Alito wrote separately to stress the "unique combinations of circumstances present" as his reason for joining the Court's opinion. 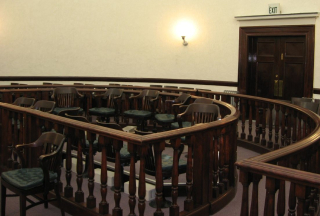 Justice Thomas dissented in an opinion joined in large part by Justice Gorsuch. In Parts I-III of Thomas's dissenting opinion, joined by Gorsuch, Thomas starts by recounting the crime alleged and then argues that there was "no evidence whatsoever of purposeful race discrimination by the State in selecting the jury during the trial below."  Further: "Each of the five challenged strikes was amply justified on race- neutral grounds timely offered by the State at the Batson hearing. None of the struck black jurors was remotely comparable to the seated white jurors. And nothing else about the State’s conduct at jury selection—whether trivial mistakes of fact or supposed disparate questioning— provides any evidence of purposeful discrimination based on race."  As in the Court's opinion, the dissenting opinion then discusses the facts, drawing different conclusion. Yet these conclusions exist in the shade of Part IV of Thomas's dissenting opinion — the portion Gorusch did not join — criticizing Batson as disregarding limitations on standing and "giving a windfall to a convicted criminal" who "suffered no injury."  Thomas concludes by stating that the "State is perfectly free to convict Curtis Flowers again" and that while the "Court's  opinion might boost its self-esteem, it also needlessly prolongs the suffering of four victims’ families." As the only Black Justice on the Court, Thomas's rejection of Batson is sure to prompt discussion.