In its opinion in Iancu v. Brunetti the United States Supreme Court held that Section 2(a) of the Lanham Act, 15 U.S.C. § 1052(a), which prohibits the Patent and Trademark Office from registering “immoral” or “scandalous” trademarks, violates the First Amendment.

Recall from the oral argument its centerpiece was the applicability of the Court's recent decision in Matal v. Tam (2017) which held that the disparagement provision in Section 2(a) of the Lanham Act, 15 U.S.C. § 1052(a) violated the First Amendment.  Justice Kagan's relatively brief — 11 pages — opinion for the Court begins with a citation to Tam and then states, "We hold that this provision infringes the First Amendment for the same reason: It too disfavors certain ideas."

At issue in Brunetti was a fashion line, which as Kagan explains:

uses the trademark FUCT. According to Brunetti, the mark (which functions as the clothing’s brand name) is pronounced as four letters, one after the other: F-U-C-T. But you might read it differently and, if so, you would hardly be alone. See Tr. of Oral Arg. 5 (describing the brand name as “the equivalent of [the] past participle form of a well-known word of profanity”). That common perception caused difficulties for Brunetti when he tried to register his mark with the U. S. Patent and Trademark Office (PTO).

Justice Kagan's opinion for the Court found the "immoral or scandalous" ban to be viewpoint-based with a viewpoint-discriminatory application. Kagan provides some examples of the inconsistencies, including the PTO refusing to register a trademark "Madonna" for wine while allowing "Praise the Lord" for a game.  Further, the Court stated, the "immoral or scandalous" bar is "overly broad."

Justices Thomas, Ginsburg, Alito, Gorsuch, and Kavanaugh joined in Kagan's opinion. But Alito wrote very briefly separately, disavowing the label of "moral relativism" that might be applied to the Court's opinion and making clear that Congress could adopt a more narrow statute. The other Justices wrote separate opinions concurring in part and dissenting in part. 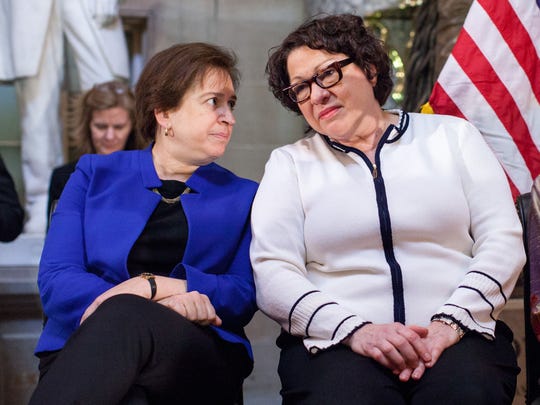 The major dissenting opinion, by Justice Sotomayor concurring in part and dissenting in part, focuses on the "scandalous" provision, arguing that the Court's opinion means that the United States will have no choice but to begin registering marks "containing the most vulgar, profane, or obscene words and images imaginable." Sotomayor's opinion, joined by Breyer, and echoed in Chief Justice Roberts's opinion also dissenting in part, is longer than the Court's opinion, and argues that the Court should have accepted the narrowing construction of "scandalous" — "interpreting it to regulate only obscenity, vulgarity, and profanity" — which would save it from unconstitutionality. Sotomayor also discusses the special context of trademarks, which while not government speech, do have a type of governmental involvement.  It is not that the speech is being prohibited, but only that the Lanham Act prohibited registration of the trademark.

[image: Kagan and Sotomayor, via]