In its fractured opinions in The American Legion v. American Humanist Association (consolidated with Maryland-National Park and Planning Commission v. American Humanist Association), a majority of the Court concluded that a 32 foot high "Latin Cross" situated on a traffic island taking up one-third of an acre at the busy intersection of Maryland Route 450 and U.S. Route 1 in Bladensburg, Md., originally erected in 1919 to honor the dead of World War I, does not violate the Establishment Clause.

Recall that during oral argument, one question was whether the cross should be evaluated by applying Lemon v. Kurtzman (1971) or whether it should be deemed more of a "passive monument" under Van Orden v. Perry (2005). Recall also that in the Fourth Circuit decision finding the cross violated the Establishment Clause, the majority found that the passive monument rule of the plurality in Van Orden v. Perry was not conclusive and stressed that the well-established Lemon test remained a "useful guidepost."

Writing for the majority, Justice Alito's opinion was joined by the Chief Justice, and Justices Breyer, Kagan, and Kavanaugh. However, two portions of Justice Alito's opinion garnered only a plurality: Kagan did not join sections §IIA and §IID, the first essentially involving a critique of Lemon's usefulness and the second relying upon the divided town counsel prayer case of Town of Greece  to conclude that "categories of monuments, symbols, and practices with a longstanding history" are constitutional.  Breyer — who wrote an important concurring opinion in the passive monument case of Van Orden — wrote a separate concurring opinion in which Kagan joined. Justice Thomas concurred in the judgment, again arguing that the Establishment Clause is not incorporated as against the states. Justice Gorsuch also wrote a separate concurring opinion, arguing that the plaintiffs had no standing based on their status as "offended observers" and contending Lemon should be "shelved" and was a "misadventure." While joining Justice Alito's opinion in full, Kavanaugh also concurred separately to reprise a critique of Lemon as inconsistent with by the Court's decisions in five categories of Establishment Clause cases.  Ginsburg wrote a dissenting opinion, joined by Sotomayor.

So what does the majority "hold"? Alito's opinion for the majority concludes that this specific cross "carries special significance in commemorating World War I," which it had at the time of its erection and "acquired additional layers of historical meaning in subsequent years" and has become "part of the community." Certainly, "the cross originated as a Christian symbol and retains that meaning in many contexts," but this "does not change the fact that the symbol took on added secular meaning when used in World War I memorials." Alito's opinion specifically rejected arguments that the cross "disrespected" Jewish or Black veterans, and specifically mentions that "one of the local leaders responsible" for the cross was a "Jewish veteran" and that the memorial includes the names of black and white soldiers. Recall that this had been broached in the oral argument, with Justice Alito asking counsel: "And do you think that the -- that the situation of -- of African Americans in Prince George's County at that time was worse -- was better than the situation for Jews?" 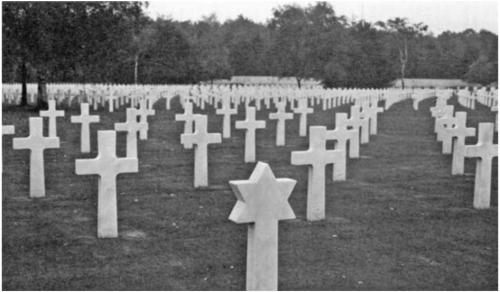 Justice Ginsburg, dissenting in a 21 page opinion including an appendix of images (including the headstones in a military cemetery, right) joined by Sotomayor, disputed the cross as a secular symbol. "Just as the Star of David is not suitable to honor Christians who died serving their country, so a cross is not suitable to honor those of other faiths who died defending their nation."  Disputing the contention that the Latin cross is a well-established secular symbol commemorating World War I military casualties, Ginsburg relates disputes in the War Department in 1919, arguing that everyone involved "saw the Latin cross as a Christian symbol, not a universal or secular one." A true secular symbol was the "mass-produced Spirit of the American Doughboy statute," of which there was one in Prince George's county, the cross being an "aberration" even at the time.  Ginsburg confronts the slippery slope argument that a contrary decision would eliminate all commemorative crosses by arguing that the in the context of a cemetery, individual markers are acceptable because they convey individuality rather than government endorsement, and that in this case, the solution could be a transfer of the cross to private rather than government property.

The decision leaves lower courts and advocates in the same doctrinal landscape that they inhabited before, although with an even clearer message that longstanding religious monuments with religious symbols, no matter how imposing, will be upheld under the Establishment Clause.