As Judge Carney explained in his relatively brief opinion, the Anti-Riot Act provides that:

(2)  to organize, promote, encourage, participate in, or carry on a riot; or

(3)  to commit any act of violence in furtherance of a riot; or

(4)  to aid or abet any person in inciting or participating in or carrying  on a riot or committing any act of violence in furtherance of a riot;

and who either during the course of any such travel or use or thereafter performs or attempts to perform any other overt act for any purpose specified in subparagraph [(1)–(4)] . . . [s]hall be fined under this title, or imprisoned not more than five years, or both.

to simplify, the Anti-Riot Act defines “riot” in two ways. A riot is a public disturbance involving acts of violence, committed by at least one person in a group, which results in property damage or personal injury. This first definition coincides with the common understanding of a riot––for instance, a crowd taking to the streets and smashing windows of a business. A riot also includes a public disturbance involving the threat of violence, by persons in a group, so long as at least one person could immediately act upon the threat. This second definition, for example, would apply to a group threatening to break the windows of a business, while the group is outside the business and holding rocks in their hands.

Yet, most troubling for Judge Carney was his interpretation that the statute "also criminalizes acts taken long before any crowd gathers, or acts that have only an attenuated connection to any riot, so long as the individual acts with the required purpose. See 18 U.S.C. § 2101(a). No violence even need to occur. A defendant could be convicted for renting a car with a credit card, posting about a political rally on Facebook, or texting friends about when to meet up."

Finally, Judge Carney found that in balancing the "social costs" of upholding the statute or "striking it down," there were other laws— including state statutes — that could protect the public from violence or public disturbances, while enforcing the Anti-Riot Act substantially infringed on the rights of free speech and freedom of assembly.  And while Judge Carney explicitly mentioned not condoning the message of the white supremacists and wrote that "one person's protest might be another person's riot," invoking controversial issues today such as "abortion, Black Lives Matter, climate change, or healthcare," his opinion is sure to be discussed as protecting right-wing protest. 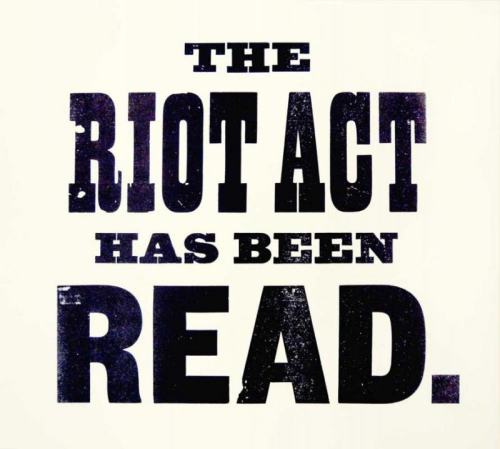