In its extensive opinion in Hodes & Nauser v. Schmidt, the Supreme Court of Kansas held that the right to abortion in protected under its state constitution and regulations of the fundamental right should be subject to strict scrutiny.

The per curiam opinion is exceedingly clear that the opinion rests on independent state constitutional grounds and that it is interpreting §1 of the Kansas state Constitution, adopted in 1859:  "All men are possessed of equal and inalienable natural rights, among which are life, liberty, and the pursuit of happiness." The court specifically finds that this provision creates judicially enforceable "natural rights" such as the right to "personal autonomy" to make decisions regarding our bodies, health care, family formation, and family life, including a woman's right to decide whether to continue a pregnancy.

Having held that the right to an abortion is encompassed within the fundamental right bodily autonomy, the Kansas Supreme Court held that strict scrutiny should apply, which the court articulated as prohibited the state from restricting that right unless it can show it is doing so to further a compelling government interest and in a way that is narrowly tailored to that interest.

At issue in the case is Kansas S.B. 95, passed in 2015, now K.S.A. 65-6741 through 65-6749, which prohibits physicians from performing a specific abortion method referred to in medical terms as Dilation and Evacuation (D & E) except when "necessary to preserve the life of the pregnant woman" or to prevent a "substantial and irreversible physical impairment of a major bodily function of the pregnant woman."

The trial court had issued a preliminary injunction, which the Kansas Supreme Court upheld, but remanded the case for a fuller evidentiary hearing applying strict scrutiny. 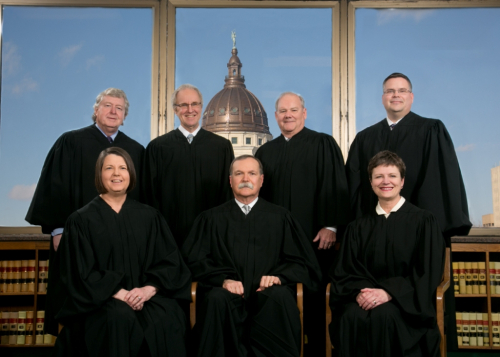 In a concurring opinion, Justice Dan Biles argued that the majority should be more explicit in articulating how strict scrutiny should be applied in the abortion context, suggesting what "our state test should look like using an evidence-based analytical model taken from Whole Woman's Health v. Hellerstedt" (2016).  Justice Biles provided a very detailed roadmap that would be attractive to the trial court. Justice Biles also placed the decision within developments in state constitutional law on abortion:

It is also worth mentioning our court has not gone rogue today. By my count, appellate courts in 17 states have addressed whether their state constitutions independently protect a pregnant woman's decisions regarding her pregnancy from unjustifiable government interference. Of those, 13 have plainly held they do. [citations omitted].

The sole dissenting Justice of the seven Justices of the Kansas Supreme Court (pictured above) was Justice Caleb Stegall, who relied on numerous dissenting opinions in both the United States Supreme Court and Kansas Supreme Court. He began his opinion by stating "This case is not only about abortion policy—the most divisive social issue of our day—it is more elementally about the structure of our republican form of government." In essence, he considers the majority to be taking an activist stance. The majority opinion does devote more than a little attention to refuting and engaging with the dissent's arguments.

Because the case cannot be reviewed by the United States Supreme Court (given that the state's highest court decided it on the independent ground of its state constitution, unless it is argued it infringes on another constitutional right), subsequent constitutional law issues will be concentrated on what happens in the trial court and what might happen in other states.