The United States Supreme Court heard oral argument in Virginia House of Delegates v. Bethune-Hill involving the ultimate issue of whether the redistricting plan of Virginia is racial gerrymandering in violation of the Equal Protection Clause of the Fourteenth Amendment.  Like many states, the redistricting legal landscape in Virginia is complex; a good explainer from Loyola-Los Angeles Law School is here.

Recall that two years ago, in March 2017, the Court in Bethune-Hill v. Virginia State Board of Elections, the Court clarified the standard for deciding whether racial considerations in reapportionment violate the Equal Protection Clause. It affirmed the three-judge court's decision as to one of the districts as constitutionally considering race, but remanded the determination of the constitutional status of the other eleven districts. 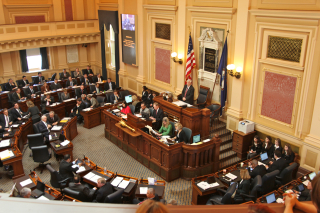 During that proceeding, the Virginia House of Delegates — one house of the Virginia legislature — was allowed to intervene, but a question on appeal to the United States Supreme Court is whether the House of Delegates, represented by Paul Clement, has standing to appeal, especially given that the Virginia Board of Elections, represented by Toby Heytens, the appellate the first time the case reached the United States Supreme Court, is now the appellee in agreement with Bethune-Hill, represented by Marc Elias. Morgan Ratner, an assistant Solicitor General, appeared on behalf of the United States and fully supported neither party, but did argue that the House of Delegates lacked standing, because "the House as an institution isn't harmed by changes to individual district lines, and while states can authorize legislatures to represent them in court, Virginia hasn't done so."  While Justice Alito seemed to take the position that all the House of Delegates needed to establish was some injury on fact, such as  the cost of publishing a new map showing the new districts, with Justice Sotomayor labeling Clement's statement that Virginia had "forfeited" the ability to object to the appeal as an "extreme" view.  There was seemingly some sympathy to Toby Heytens' view that the Court was essentially being asked to referee a dispute between branches of the Virginia state government, with Justice Alito also asking whether or not the question of which entity may represent the state is not a question that should be certified to the Virginia Supreme Court.  The precedential value and applicability of Minnesota State Senate v. Beens (1972), which Justice Ginsburg pointed out has not been cited in 30 years and was from an era in which standing was more "relaxed" and which others distinguished in terms of the impact on the legislative body.

On the merits, one issue was credibility of witnesses and deference to the court's factual determinations, especially given that the first three judge court had reached some opposite conclusions, including in some districts whether or not racial considerations predominated (and thus strict scrutiny would apply). This might seemingly be explained by the different standard articulated by the Court's previous decision in Bethune-Hill before remand, but this did not seem to be addressed. As typical, the precise facts in the map-making and the interplay between the Voting Rights Act and the Equal Protection Clause made the argument exceedingly detailed. For example, there are particular questions about the BVAP [Black Voting Age Population] in specific districts and what percentage is acceptable in each district as individualized or as comparative to other districts.

If the Court does not resolve the case on lack of standing, one can expect another highly specific opinion regarding racial gerrymandering in the continuing difficult saga of racial equality in voting.

[image: Virginia House of Delegates 2012 via]