In oral argument in The American Legion v. American Humanist Association, consolidated with Maryland-National Park and Planning Commission v. American Humanist Association, the Court considered whether a 40 foot "Latin Cross" situated on a traffic island taking up one-third of an acre at the busy intersection of Maryland Route 450 and U.S. Route 1 in Bladensburg, Md., erected to honor the dead of World War I, violates the Establishment Clause.

Recall that a divided panel of the Fourth Circuit held that the cross violated the Establishment Clause, applying Lemon v. Kurtzman (1971) as a "useful guidepost" augmented by the plurality in Van Orden v. Perry (2005) regarding passive monuments.

Michael Carvin, arguing for the American Legion, proposed replacing the Lemon test with a very broad standard that made all sectarian symbols erected or maintained by governments presumptively constitutional, except in "the rare case in which they've been misused to proselytize."  Carvin's argument would essentially vitiate the Establishment Clause and the Justices did not seem inclined to go that far.  However, there was much discussion regarding whether the endorsement inquiry under Lemon — or any portion of Lemon — was appropriate or workable. 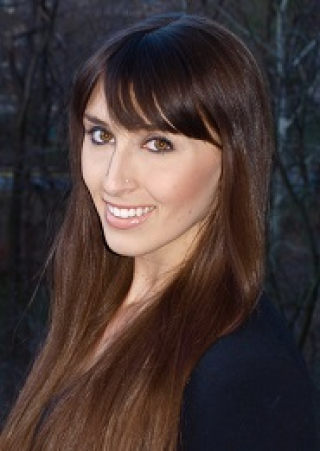 In considering whether the Latin cross was exclusionary of non-Christians, Neal Katyal, arguing for the Maryland state government party, stated that "factually, one of the main proponents for fundraisers of this particular cross was J. Moses Eldovich, who himself was a Jewish veteran."  Later in the argument, Chief Justice Roberts returned to this point in a colloquy with Monica Miller (pictured right) arguing on behalf of the American Humanist Association:

CJ ROBERTS: Well, but that’s one of the main criticisms of the - - - of the Lemon test - - - that different people are going to process that [the relationship between Christianity and citizenship virtues]  in different ways.
I mean, you heard from one of your friends on the other side that one of the major fund-raisers of this was a Jewish individual. So he was obviously observing it or anticipating it in a different way.

MILLER: Well, Your Honor, I think that we cannot take one person's example, again, someone who is probably one of maybe the only Jewish people in that county at a time when there was an active clan [Klan] burning crosses, burning Jewish buildings or Jewish, you know, businesses at a time when atheists couldn't run for office, Jews had to swear that they believed in an after-life in order to qualify, I mean —

Justice Kagan, attempted to ask a question, “why does it even matter?” But Justice Alito, overriding Kagan, pointed out that there were 12 African-American soldiers’ names on the cross, and then asked Ms. Miller:

JUSTICE ALITO: And do you think that the -- that the situation of -- of African Americans in Prince George's County at that time was worse -- was better than the situation for Jews?

Ms. Miller responded by stating that it was unclear how the names actually were chosen to be on the cross and that not all of them were from Prince George’s county.

While predictions from oral argument are always fraught, the majority of the Court seems poised to depart from Lemon and rather than articulate a new standard, stress the longstanding nature of the "monument" as in Van Orden.