In his essay review of the new book Separate: The Story of Plessy v. Ferguson, and America's Journey from Slavery to Segregation by Steve Luxenberg, critic Louis Menand retells the history of the Plessy v. Ferguson decision: infamous in hindsight but unnoticed in its time. Menand remarks, “even when principal figures in the case died, years later, their obituaries made no mention of it.” Menand contextualizes the case within the post-Reconstruction Jim Crow south and examines Plessy’s role in enshrining white supremacy. 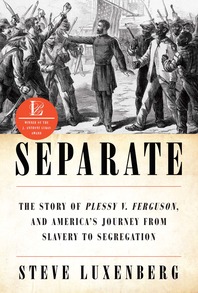 Menand provides a rich discussion of Luxenberg’s hefty book (at 624 pages) which focuses its narrative on three key players in Plessy v. Ferguson: “Albion Tourgée, one of Plessy’s lawyers; Henry Billings Brown, the Justice who wrote the majority opinion; and John Marshall Harlan, who filed the lone dissent.” Menand’s assessment of the book is mixed. For example, Menand writes that the book is

deeply researched, and it wears its learning lightly. It’s a storytelling kind of book, the kind of book that refers to Albion Tourgée as Albion and John Harlan as John, and that paints the scene for us (“On a bright and beautiful night in late October 1858 . . . ”). Luxenberg does not engage in psychological interpretation. He doesn’t mention, for instance, that [Justice Henry Billings] Brown’s Yale classmates called him Henrietta because they thought he was effeminate—which might have contributed to Brown’s eagerness not to appear like a man who didn’t belong. And he dismisses in a footnote speculation that Robert Harlan, a man of mixed race who grew up as a member of John Harlan’s family, might have been a half brother. Even if he wasn’t in fact related to John, however, it might have mattered if John believed otherwise.

But while Menand argues that the book doesn't ultimately help with "the big historical questions," it is clear from Menand's review that the book offers deep insights into the case that constitutionalized racial segregation as equality.  In Plessy, the United States Supreme Court betrayed the promise — and meaning — of the the Fourteenth and Thirteenth Amendments to the Constitution.  By focusing at the legal actors who participated in the case, including Tourgée who argued for Plessy, Luxenberg's book is sure to attract attention from constitutional scholars and students.  I look forward to reading it.