In its en banc opinion in American Beverage Association v. City and County of San Francisco the Ninth Circuit unanimously found that the San Francisco ordinance requiring a warning about the health effects of sugary drinks likely violated the First Amendment and should be enjoined.

The ordinance provided that advertisements for Sugar-Sweetened Beverages (SSB) include a warning:

WARNING: Drinking beverages with added sugar(s) contributes to obesity, diabetes, and tooth decay. This is a message from the City and County of San Francisco.

It further defined advertisements and importantly provided detailed instructions regarding the form, content, and placement of the warning on SSB Ads, including a requirement that the warning occupy at least 20% of the advertisement and be set off with a rectangular border. 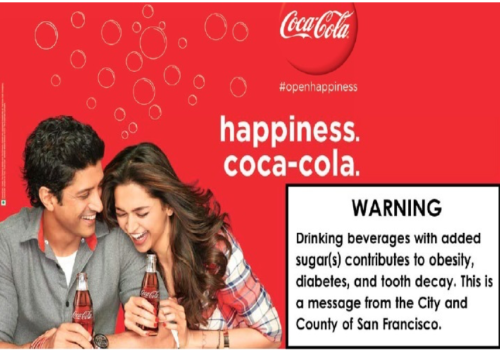 Recall that the Ninth Circuit panel had similarly found that the SF ordinance most likely violated the First Amendment, reversing the District Judge's failure to grant a preliminary injunction.

The problem of the level of scrutiny to apply when the government compels speech in a commercial setting is one that has been reoccurring. In short, the choice of standards is between the commercial speech test of Central Hudson Gas & Elec. Corp. v. Pub. Serv. Comm’n of New York (1980) or the more lenient test for disclosure of Zauderer v. Office of Disciplinary Counsel of the Supreme Court of Ohio (1985).  Judge Graber noted that the Ninth Circuit had previously decided that the more lenient test of Zauderer applied in CTIA - The Wireless Ass'n v. City of Berkeley. However, a closely divided United States Supreme Court in National Institute of Family & Life Advocates (NIFLA) v. Becerra (2018), "applied  the Zauderer test without deciding whether that test, in fact, applied" and found that a California statute mandating disclosures by crisis-pregnancy centers violated the First Amendment. But, according to Judge Graber's opinion, while NIFLA required the Ninth Circuit to reexamine the approach to challenges to compelled commercial speech, "nothing in NIFLA suggests that CTIA was wrongly decided," especially given the concern with health and safety warnings as permissible.

Under Zauderer, the usual factors require that the compelled disclosure be factual, non-controversial, and not unjustified or unduly burdensome, and then application of the lenient standard of a  substantial government interest to which the mandated disclosure is reasonably related.  Here, Judge Graber's opinion for the court concluded that the warning was unduly burdensome given the mandated size of the warning as 20% of the image.

While Judge Graber's opinion for the en banc court is relatively succinct, several other judges wrote opinions to disagree with the reasoning but not the result. Judge Sandra Ikuta, who authored the panel opinion, which was issued before the Supreme Court's opinion in NIFLA, argued that NIFLA provided a (new) framework mandating that the compelled speech regulation be considered a First Amendment content-based regulation subject to heightened scrutiny unless a Zauderer exception applies.  In another concurring opinion, Judge Morgan Christen, joined by Chief Judge Sidney Thomas, agreed with the majority that Zauderer applied, but concluded that the warning did not survive the "purely factual" and "noncontroversial" factors of Zauderer.  A third concurring opinion, authored by Judge Jacqueline Nguyen, objected to the application of Zauderer outside the context of false or misleading speech and argued that the more intermediate scrutiny test of Central Hudson Gas & Elec. Corp. v. Pub. Serv. Comm’n of New York (1980) should apply.

These varying opinions suggest that the issue of the First Amendment consequences of states requiring warnings and thus arguably infringing commercial speech is far from resolved, although the agreement on the result here may mean that this is an unlikely case for Supreme Court review.