In a complaint filed in United States District Court for the Middle District of Florida against Donald Trump and the Donald Trump Campaign, former campaign staffer Alva Jones seeks relief on three counts: battery as against Trump in his individual capacity for a forcible kiss; unequal pay based on gender under the Unequal Pay Act against the Campaign organization; and unequal pay based on race under 42 USC §1981 against the Campaign organization. 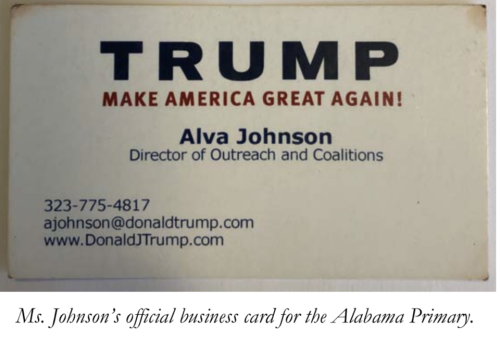 The 39 page complaint in Jones v. Trump is filled with factual allegations, embedded tweets and photographs, and numerous footnotes.  The allegations substantiating the battery claim include recitations regarding previous allegations and statements regarding similar actions.

Like the ongoing suit in New York state courts, Zervos v. Trump, for defamation linked to sexual harassment, one issue that defendant Trump could raise would be presidential immunity.  But the argument for any immunity is exceedingly weak given the United States Supreme Court's unanimous 1997 decision of Clinton v. Jones  holding that then-President Clinton was subject to suit in federal court. And any immunity does not extend to the campaign organization.

And as Ronan Farrow writes in the New Yorker:

The most legally significant aspect of Johnson’s suit may ultimately be something the complaint does not explicitly address: the pervasive use of nondisclosure agreements by Trump during his campaign and in his Administration. Johnson’s suit is at least the sixth legal case in which Trump campaign or Administration employees have defied their nondisclosure agreements.