For his 2018 Year-End Report on the Federal Judiciary, the sexual harassment concerns which surfaced at the end of Chief Justice Roberts 2017 report (which we discussed here) occupied center stage. Opening with an anecdote about the importance of law clerks, the Chief Justice discussed the contribution that the Federal Judiciary Workplace Conduct Working Group has made, linking to its more than 140 page report issued in June. The Chief Justice noted that the report determined that "inappropriate workplace conduct is not pervasive within the Judiciary, but it also is not limited to a few isolated instances involving law clerks" and that "misconduct, when it does occur, is more likely to take the form of incivility or disrespect than overt sexual harassment" and frequently goes unreported.  The Chief Justice noted that committees have proposed changes to various codes of conduct and the employment dispute resolution plan.

Interestingly, the Chief Justice does not note that these codes exclude the United States Supreme Court itself, which is of continuing interest, and which the Chief Justice has alluded to in the past, as we last discussed here. Although he writes that "The Supreme Court will supplement its existing internal initiatives and experience of the other federal courts."

The Chief Justice again thanked judicial staff for working through numerous natural disasters, but again did not address the declining diversity of the federal bench, a lack we mentioned last year and which has seemingly only increased. 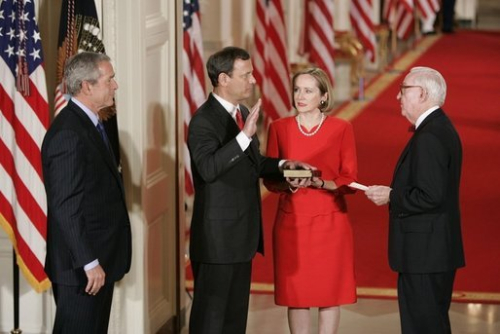 image: John Roberts being sworn-in as the 17th Chief Justice of the United States by Supreme Court Associate Justice John Paul Stevens, 2005, via.