The Court has ordered oral arguments set for March on the merits of two cases involving the recurring issue of the constitutionality of partisan gerrymandering, Rucho v. Common Cause and Lamone v. Benisek.

Both cases have extensive histories including previous appearances before the Supreme Court.

From North Carolina is Rucho v. Common Cause. In January 2018, a three-judge Court's extensive opinion found North Carolina's 2016 redistricting plan was unconstitutional partisan gerrymandering under the Equal Protection Clause, the First Amendment, and Article I §§ 2, 4.  The United States Supreme Court stayed the judgment shortly thereafter,  and then vacated the opinion in light of  Gill v. Whitford (2018). In July 2018, the three judge court entered an even more extensive opinion - 300 pages - finding that standing regarding an equal protection challenge was satisfied under the Gill standard. The Court also reiterated its conclusions of the unconstitutionality of partisan gerrymandering, and enjoined the State from conducting any elections using the 2016 Plan in any election after the November 6, 2018, election.

From Maryland is Lamone v. Benisek.  In June 2018, the United States Supreme Court issued a brief per curiam opinion declining to disturb the three judge court's decision not to grant to a preliminary injunction, at the same time the Court rendered its Gill v. Whitford opinion, and essentially reserved the issue of partisan gerrymandering for another day.

It seems that day has come — or will soon — but whether or not the Court will actually grapple with the constitutionality of the problem of partisan gerrymandering is as yet uncertain. 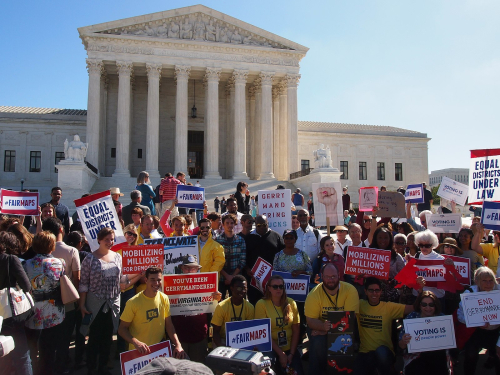