The United States Supreme Court heard oral arguments in Timbs v. Indiana, raising the issue of whether the Eighth Amendment's prohibition of "excessive fines" is incorporated as against the States and how this relates to forfeitures. The underlying facts in the case involve the forfeiture of a Land Rover.  Recall that the Indiana Supreme Court rejected an excessive fines challenge under the Eighth Amendment concluding that "the Excessive Fines Clause does not bar the State from forfeiting Defendant's vehicle because the United States Supreme Court has not held that the Clause applies to the States through the Fourteenth Amendment." 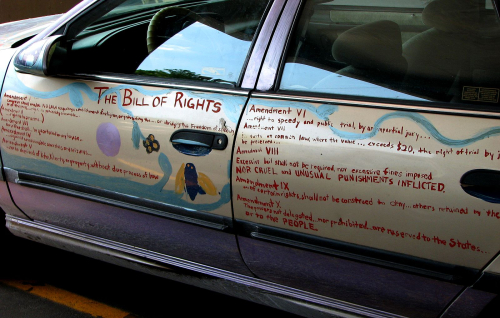 The relationship between the incorporation of the right and the scope of the right permeated the argument. As Justice Kagan observed to the Indiana Solicitor General, there were two questions:

And, really, what you're arguing is about the scope of the right.

On the other hand, Chief Justice Roberts, responding to the argument of Wesley Hottot on behalf of the petitioner Tyson Timbs, stated that the collapse of the two questions was to ask the Court to "buy a pig in a poke," to just hold that the right is incorporated and later figure out what it means.

In his rebuttal, Mr. Hottot argued that the case was about "constitutional housekeeping," adding that while the Court had "remarked" five times over the last 30 years that the "freedom from excessive economic sanctions should be applied to the states," it had never explicitly so held.

If the oral argument is any indication, the Court seems poised to rule that the Excessive Fines Clause is incorporated through the Fourteenth Amendment's Due Process Clause.

Professor Ruthann, Is that your car? Paul (Your blogs are always welcome and keep me up to date, sort of.)